Premier League have announced the 2018/19 fixtures and Nuno Espirito Santo will be aiming for a strong start to the season with Wolves.

The newly-promoted side will begin their season against Everton at home. A winning start could prove to be priceless for the Molineux outfit.

Wolves face the likes of Manchester United and Manchester City in their first five games and therefore they will need all the confidence they can get during their opening fixture.

Nuno has a talented squad at his disposal and Wolves will be looking to secure a respectable finish next season.

They will be delighted with the fact that the tough games as evenly spread out through the season. It will give them time to recover and build confidence even if they lose against the top teams.

Wolves have also been handed a favourable run in next season. They will face the likes of Southampton, Brighton, Watford, Fulham and Liverpool in their last five games. 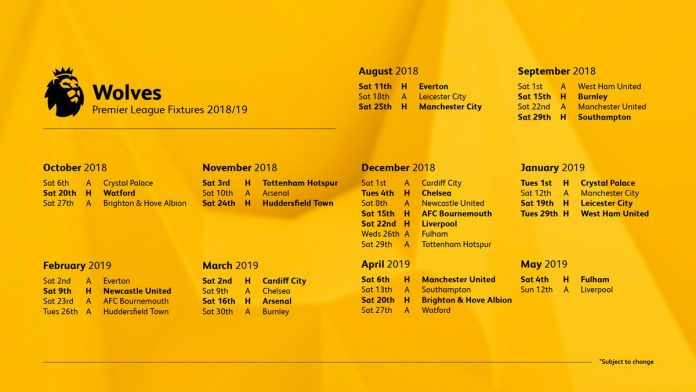 Here is how the Wolves fans reacted to their fixtures.

We are gonna win the league

Do not underestimate any team in this league, we will be fools too!!!! But what a feeling this is boys and girls……… WE’RE BACK!!

Run in doesn’t look to bad

Good run of fixtures till @SkySports get involved ??‍♂️

Look at that October! Really encapsulates the prestige & majesty of the ‘Best League in the World’….head-to-heads with 3 global titans of the game….