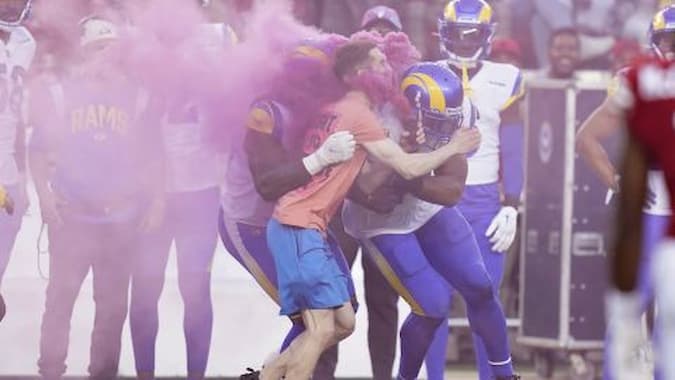 While Bobby Wagner and the Los Angeles Rams may have lost their Monday Night Football game, they certainly won the internet – or at least Wagner did.

There wasn’t long left of the first half, then a fan holding a pink pyro ran onto the field, forcing a stoppage in play. They evaded security until getting closer to the Rams sideline, where Wagner stepped in and tackled the protester to the ground.

Bobby Wagner stopped the fan who ran onto the field 😳

The fan, was reportedly an animal activist, they were wearing a pink shirt and blue shorts. Running down the 30-yard line towards the Rams sideline. Rams outside linebacker Takkarist McKinley was seen making a move towards the fan as well, however it was Wagner who made the full contact bringing the fan back down to earth, quite literally. Next a security guard jumped straight on top of them, before likely detaining the suspect.

Down below is another angle where spectator brothers and retired star quarterbacks Eli and Peyton Manning had their say on what happened.

“Get him down, get out, and now let these guys take over.” Peyton said.

Wagner, a six-time Pro Bowler, is in his first season with the Super Bowl champions, and led the team at half time with five total tackles.