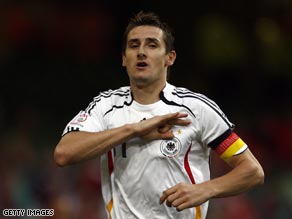 Miroslav Klose has put Germany in firm position to book a place in the 2014 FIFA World Cup final after netting his side’s second goal in the  23rd minute against the host nation Brazil.

The strike comes just 12 minutes after Thomas Muller opened the scoring. Klose’s second goal of this World Cup takes his overall tally to 16 goals and is now the leading goalscorer in the World Cup, surpassing Brazil legend Ronaldo.