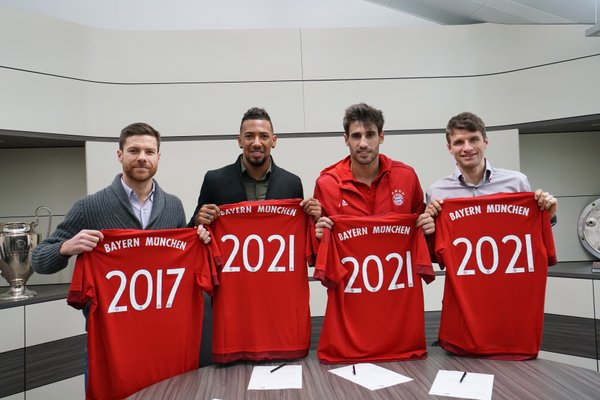 The German international forward was a transfer target for Manchester United as their manager Louis van Gaal was keen on adding him to the Red Devils’ squad in the summer, after having signed his compatriot Bastian Schweinsteiger from the Allianz Arena.

Muller was one of the former Barcelona manager’s transfer target at United, according to the Express. and him signing an extension at Bayern will be a blow for Van Gaal and United. His new deal, along with that of Boateng and Spanish international duo will keep them with his current employers until 2021.

Bayern chairman Karl-Heinz Rummenigge has expressed his delight after four star players committed their future to the Bundesliga champions.

“We’re delighted these important players have made long-term commitments. Thomas, Jerome and Javi know how to win trophies, including the Champions League. They will add quality and stability to our team in the long run,” he explained.

Muller took on Twitter to confirm that he is happy to have put pen on paper, which will keep him at the club until 2021.

“I’m proud and happy to tell you that i have extended my contract at @FCBayern until 30.06.2021 #esmuellert #FCB,” Muller tweeted.

I`m proud and happy to tell you that i have extended my contract at @FCBayern until 30.06.2021 #esmuellert #FCB pic.twitter.com/X3AwouYtlQ

He also went on to suggest that Bayern can continue their success for over the next few years, which was one of the reasons for him to agree an extension with Pep Guardiola’s side.

“I have the feeling and am convinced that FC Bayern can play very successful football over the next few years. I’m proud and delighted about extending my contract,” the forward added.