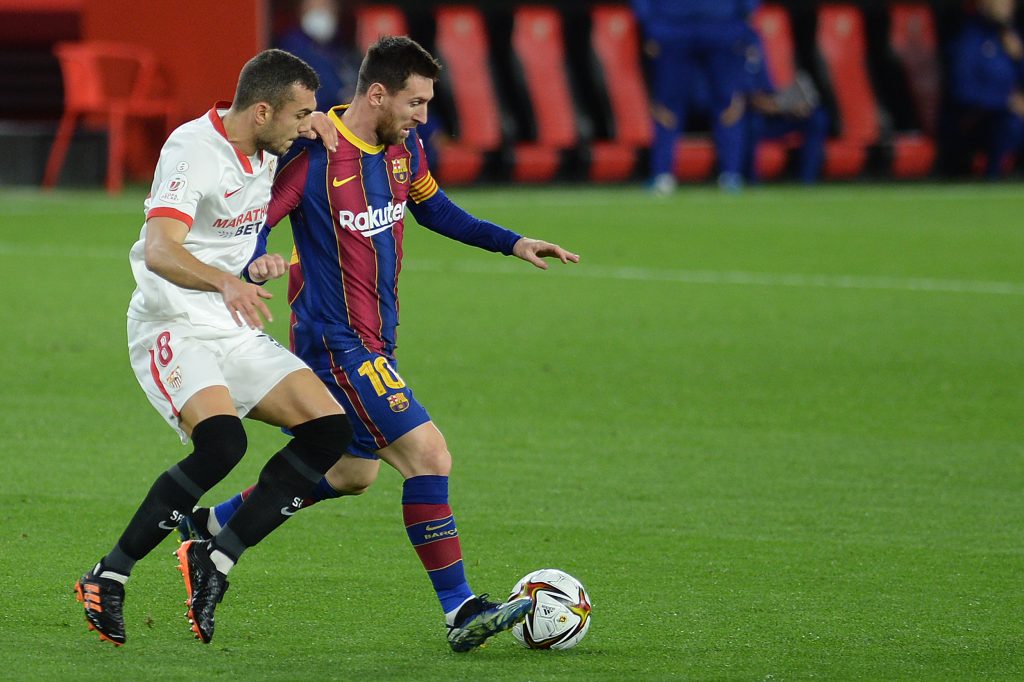 Saturday’s La Liga action sees Sevilla face Barcelona, who are still holding on to a glimmer of hope that they can catch Atletico Madrid.

As the season reaches a make-or-break period, the two sides topping the form table in La Liga lock horns in a crunch meeting at the Ramon Sanchez Pizjuan Stadium.

Barca have no margin for error as they sit five points adrift of Diego Simeone’s men, who also have a game in hand.

Real Madrid could throw Ronald Koeman and Co a lifeline as they tackle Atletico in the 168th El Derbi in La Liga.

Meanwhile, a victory would provide a quantum leap to the Andalusian giants’ hopes of securing a top-four finish in La Liga for the second season in a row.

Sevilla will be looking to build on a 2-0 head-to-head success in Copa del Rey earlier this month, as they seek only their first home win against Barcelona in La Liga since October 2015.

You can watch this game and all other La Liga games live online.

Coming into this matchday, the Andalusians have kept a clean sheet in five league matches on the bounce while scoring an average of 2.2 goals per game.

Julen Lopetegui has based his side’s success on a rock-solid defence that has conceded a league-low 16 goals this season.

Los Rojiblancos are the only team among the current top-five yet to smash a 20-goal barrier on home soil having averaged 1.72 goals scored per home La Liga fixture.

Sevilla have scored ten goals in their last four La Liga home matches, one more than they managed in their previous seven top-flight games at the Ramon Sanchez Pizjuan.

Barca slotted three goals past a newly-promoted Elche in the La Liga midweek, stretching their undefeated streak in the competition to 14 matches (W11, D3).

Away from home, Koeman’s men have won all five La Liga fixtures since the turn of the year, returning a +9 goal difference from that sequence (GF:13, GA:4).

However, the Catalans have failed to find the net in three of their last four competitive trips to Andalusia (W1, D1, L2).

Although the Blaugrana have the most La Liga goals scored under their belt this season (53), only 39.62% of those strikes came on the road (21).

At the other end of the pitch, their tally of only nine goals conceded away from home is La Liga’s joint-best this term.

Barcelona’s capacity to finish their away matches on a strong note has seen them ship just one goal inside the final 15 minutes of play across their 11 league trips thus far.

The Argentinean duo Lucas Ocampos and Marcos Acuna are forced out of action with injuries, but Lopetegui has the rest of his squad fit and ready.

Meanwhile, Philippe Coutinho, Ansu Fati, Sergi Roberto and Miralem Pjanic are on the sidelines for the visiting side.