According to reports from The Guardian, West Ham are ‘weighing up a bid’ for Tottenham defender Juan Foyth in the January transfer window.

David Moyes is looking to bolster his defence and has earmarked Foyth as a potential option.

West Ham have conceded 38 goals in the Premier League, and Moyes is, therefore, keen to add a defender to his ranks before Friday’s transfer deadline.

The Argentine defender joined Spurs in 2017 for a reported fee of £8 million.

He has made only three appearances under Jose Mourinho and hasn’t played in the New Year. Foyth has dropped down the pecking order at the club and is ‘unhappy’ with his lack of opportunities.

Earlier this month, Foyth’s agent, Claudio Curti, said that the Argentine defender would be considering moving elsewhere on loan for the rest of the season.

Foyth is primarily a centre-back, but he is also capable of operating as a right-back and could fill in for Ryan Fredericks.

It remains to be seen whether West Ham make a move for him instead of Kyle Walker-Peters who is reportedly close to joining Southampton this month.

Note: It seems the Guardian author has changed the original story. 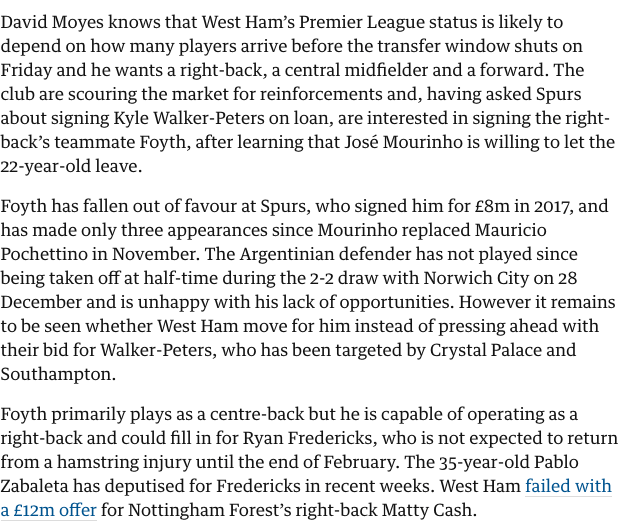