Report: Rangers handed boost as Lille could move for Sadiq Umar instead of Alfredo Morelos

Rangers brought in two strikers last week in Kemar Roofe and Cedric Itten, indicating that they were preparing for life without Lille-linked Alfredo Morelos.

The Colombian striker will be sold if the Ligue 1 outfit can meet the Light Blues’ asking price, but it appears that they are ready to move on and look elsewhere for the attacking reinforcements they want.

According to OwnGoal Nigeria, Partizan Belgrade striker Sadiq Umar has emerged as an alternative target for the French side, and they have tabled an improved bid for his signature after their initial bid was knocked back.

The Serbian outfit want £13.5 million for the Nigerian, and both sides are likely to strike a deal as Rangers continue to insist that Morelos is worth £20 million.

Lille sealing a deal for Umar will come as a huge boost for Steven Gerrard’s side as that could see them hold on to their Colombian star for one more season.

While Umar flopped during his brief Rangers spell, he has shone in Serbia, grabbing a brace over the weekend after ending last season with 17 goals and 17 assists, and that form has attracted both Lille and AS Monaco.

He could end up doing the Ibrox outfit some favour if he joins the French outfit, and having Morelos, Jermain Defoe, Itten and Roofe will definitely hand Gerrard a massive advantage in the title race.

The Colombian bagged a brace in the 3-0 victory over St. Mirren yesterday, and it will be interesting to see if Rangers can hold on to him for one more campaign. 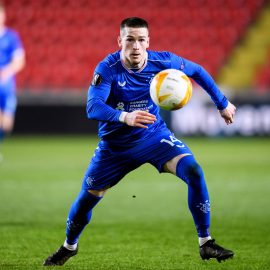