Blackpool are away to Tottenham on Saturday, entertain top 10 team Bolton next and are away to Manchester United in their final game of the season. Looking at how the title race is going down to the wire, if United go into the game defending their unbeaten home record in the league, or if they need to win the game for the title, you can forget Blackpool’s chances there (the Castrol EPL Match Predictor gives Blackpool a 4% chance of winning the game, with a 3-0 home win the most likely result).

There are doubts in some quarters whether Tottenham want to play in the Europa League next season or whether they consider it a distraction and would be happier finishing 6th and having a go at the Champions League spots next season without European distractions. It’s food for thought for another article, but on paper (and on form) Blackpool are unlikely to get a win here, and they’d be extremely lucky to get a point.

That leaves Blackpool with only the Bolton game to get a result from. Currently Blackpool are 39% to win that game and 63% to avoid defeat. However, their recent form doesn’t give much hope, but if there was ever a game they needed to win it would be this one.

Wigan are away to Aston Villa in a game that they are likely to get at least a point out of.

The second game is Wigan v West Ham, a true relegation six-pointer, and although we’ll be previewing this game next week it’s safe to say that predicting that result is a foolish task. Wigan’s recent form does give them the edge, and personally I see them getting the three points there.

The final game is away to Stoke. By this point Wigan might be completely safe or still struggling for points. In any case I think Stoke’s gameplan might be too disruptive for Wigan to handle and I would give Stoke a win here.

Wolves host West Brom this weekend, a match that West Brom are predicted to win at 38% (with Wolves win % at 37). Personally I think Mick McCarthy has the experience to get his players motivated enough to win this fixture but they’ve missed so many chances this season. Still, Wolves to edge this game.

The next game sees Wolves away to Sunderland, whose last home game was a shock 3-0 defeat to Fulham. Sunderland are just about safe from relegation but are in woeful form, but I don’t see Wolves getting a win here, a point might be there for the taking though.

The final game has Wolves hosting Blackburn. A win for Wolves? Again I wouldn’t be surprised but they’ve disappointed so often this season that it’s difficult to see a win, at best a point here.

West Ham are home to Blackburn this weekend, a game they’re predicted to win (at 44%). They’re in the worst position of the bottom four teams and barring a miracle (i.e. winning all three games), they’re not likely to survive the drop. Will they beat Blackburn? They just might, but if they do, Blackburn are unlikely to be back into the relegation mix (unless they themselves lose all three of their games with West Ham winning all three). And for that to happen, Wolves would need to beat Blackburn (both teams’ final game of the season).

The next game for the Hammers is the six-pointer against Wigan. I don’t see them winning this game, as stated above.

The final game is at home to Sunderland. I see them beating Sunderland, who’ve been woeful, but would it be enough?

From the predictions above, it looks like West Ham and Blackpool will be relegated after finishing on 38 points each, and one of Wigan and Wolves going down, depending on goal-difference. I’m picking Wigan to stay up.

Here’s a look at the end of season Castrol EPL Predictions: 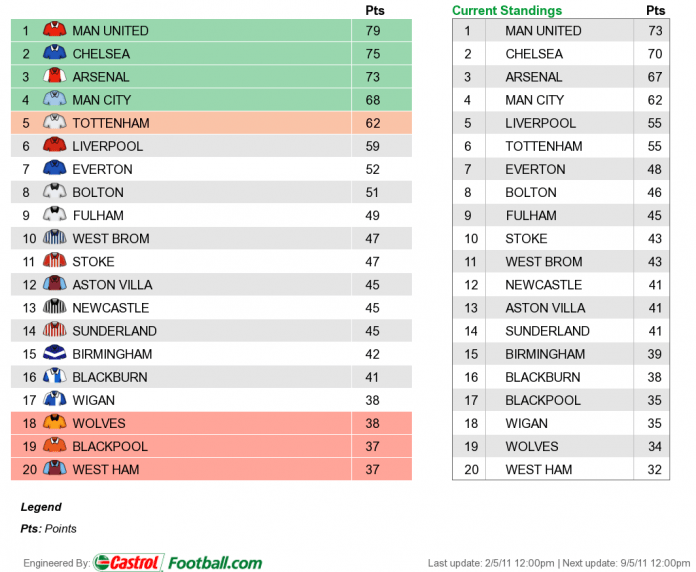 Although my points totals predictions are 1 more for each of the four clubs, the Castrol Predictions effectively match my predictions for the relegation battle.

Let us know your thoughts on which team out of these will survive till next season.