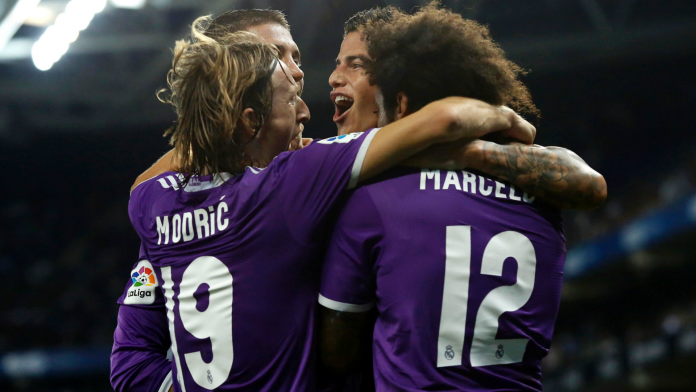 Zinedine Zidane’s Real Madrid were without Cristiano Ronaldo and Gareth Bale for their trip to Espanyol but that didn’t stop them from equalling the Periquitos’ local rivals Barcelona’s league record of 16 consecutive wins.

Goals from James Rodriguez—his first for the club in five months—and Karim Benzema made sure los Blancos head into mid-week’s clash against Villarreal with one eye on breaking a record held by their fierce rivals.

Ronaldo, who made a scoring return to the side last weekend, was absent with a sore throat and Bale’s hip injury sustained during Real’s Champions League win over Sporting Lisbon meant that he didn’t travel as well. But Marco Asensio and Lucas Vazquez made sure the stars weren’t missed as their side ran out comfortable winners at the Cornella-El Prat.

The win sees the Merengues sat atop the standings with four wins out of four, and manager Zidane took the record to salute the work being done by his players. The win also broke the club’s previous winning streak of 15 games under Miguel Munoz in 1960/61.

“Of course, the record means a lot to us because it’s proof of the phenomenal work all the players are doing. Getting points is the most important thing but it’s also nice to have a record like this,” said Zidane after the game.

With the Clasico a fair distance away, Real have a chance to widen the gap between themselves and second placed Barca when they take on Villarreal Tuesday night, with the Blaugrana set for a titanic clash with Atletico Madrid the following day.

Barca’s attacking trident of Leo Messi, Luis Suarez and Neymar had a game of tap-ins as they crowned the club’s first visit to little Leganes with a 5-1 win. Leganes have the second smallest ground in the top flight and they made for a fascinating viewing in the opening exchanges with their high pressing football.

However, it was a case of delaying the inevitable as Barca capped the MSN’s first league start together this season with another big win, the third time they have scored five or more goals this season.

Messi first player ever to score in 34 Primera Division stadiums. Raul had previous best on 33 [via @pedritonumeros ] #atleastonerecordaweek

Atletico were on a rampage of their own against Sporting Gijon as a 5-0 win saw their forwards hit some form ahead of their Camp Nou trip on Wednesday. Los Rojiblancos are unbeaten this season in all competitions.

Antoine Griezmann continued his fine scoring streak with a double while Kevin Gameiro also found the net against sorry Sporting. Fernando Torres picked up where Griezmann left after coming on for the Frenchman and netted a late brace to complete the scoring.

Villarreal’s summer signings had a mixed day against Real Sociedad in a 2-1 win as Alexandre Pato’s missed penalty was atoned for by Nicola Sansone’s brace. While Sevilla could only manage a 1-1 draw away to nine-man Eibar who had their goalkeeper Yoel Rodriguez and captain Dani Garcia sent off.

Pako Ayesteran’s Valencia slumped further into the relegation abyss with a fourth straight defeat, this time at Athletic Bilbao as Aritz Aduriz’s double handed los Leones their second win of the season.

However, Ayesteran remains confident of turning things around for los Che, saying the concession of goals has been an individual issue, not tactical. “We believe we are capable of turning this situation around. We are conceding goals, and this is more to do with defending than defensive concepts,” he said.

Las Palmas registered their third win in four games to keep pace with Real Madrid and Barcelona at the top of the table. Their goals have dried down though; after scoring nine goals in their first two games, Quique Setien’s men have managed only two more in their last two games. Figueroa Momo’s early penalty against Malaga made sure they continued their fairy tale start.