French magazine Le 10 Sport in their February edition has covered an article on players who PSG might sign in the summer transfer window.

Le 10 reports that PSG are looking to restructure their squad next summer, and manager Laurent Blanc will be handed a massive €300m transfer war-chest for summer signings.

The main target for the French champions will be Chelsea winger Eden Hazard. The Belgian superstar hasn’t had a great season for the Blues, and he could be tempted to make a move away from London, should Chelsea fail to secure Champions League football next season, which is a high possibility. 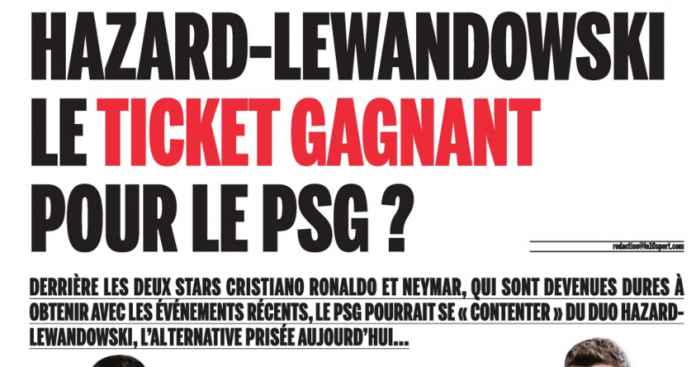 Blanc wants to emphasise on wing play, and the French club are already planning to use Di Maria and Hazard to operate from the wings. Le 10 claims that Hazard wishes to leave Chelsea at the end of the season. He has always shown a keen interest in moving to Paris, which means a transfer to PSG is highly on the cards.

Real Madrid have reportedly set their sights on Hazard, but the La Liga giants will be under a transfer embargo, which gives PSG an upper hand over other potential suitors in the race to sign the Belgian winger.

The report also claims that PSG are also interested in signing Robert Lewandowski from Bayern Munich. The Polish star has been in phenomenal form this season and has attracted interest from top European clubs like Manchester United and Real Madrid.

Le 10 adds that PSG will focus hard to sign the 27-year-old striker in the summer. With Edinson Cavani all set to leave the club, and other top targets like Neymar and Cristiano Ronaldo are almost impossible to sign, the French champions will turn their attention on Lewandowski instead to add more depth to their forward line.