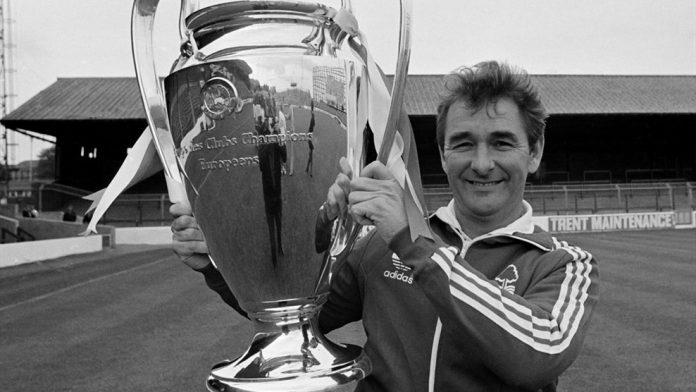 On this day in 2004, legendary football manager Brian Clough lost his fight with stomach cancer at the age of 69.

Clough was under ill health for several years and had a liver transplant in 2003.

As controversial as he was successful, Clough was the epitome of eccentricity. He began his footballing career with Middlesbrough back in 1951 as a teenager. Between 1955 and 1961, he appeared in 222 league matches for Boro scoring an astonishing 204 goals. He moved to Sunderland in ’61 where his prolific form in front of the goal continued and he scored 63 goals in 74 matches.

His playing career was tragically cut short during a game against Bury at Roker Park in 1962. Charging towards the Bury goal, Clough collided with goalkeeper Chris Harker which resulted in the tearing of his medial and cruciate ligaments. Footballers seldom made a comeback after suffering such a major injury during that era. But Clough, through sheer will and determination, returned to football two years later. Unfortunately his body could only permit him to play three more games before he hung up his boots at the age of 29.

Despite his early retirement, Clough has the highest goals-per-game ratio of 0.916 in the list of footballers who have scored over 200 goals in the English Football League.

But it is his feats as a football manager that defines his legacy. A short stint as a coach for the Sunderland youth team propelled him to a managerial journey that was laden with some of the biggest trophies the sport had to offer.

After two seasons with Hartlepools United, Clough joined Derby County in 1967 with whom he won the Second Division title in the 1968-69 season. The Rams won the First Division title under Clough in 1972. Clough’s mind for tactics and Peter Taylor, his trusted assistant’s excellent man management skills, made the pair a formidable duo in English football.

But in 1974, following a feud with the board of directors at Derby, the pair moved to Brighton and Hove Albion. Clough left Brighton after less than a year to join Leeds United. We all know how that ended.

Clough’s magnum opus, however, came with Nottingham Forest who won two consecutive European Cups under him in 1979 and 1980.

Family’s day out in Turkey!

On this day in 2011, Turkish giants Fernerbahce played a league match against Manisaspor in front of a 41,000 strong crowd which consisted of only women and children. That’s right.

No, this was not an outreach program by the Turkish government but rather a “punishment” by the Turkish football association. Fenerbahce played Shakhtar Donetsk in a pre-season friendly in July. During the game, several Fernerbahce fans invaded the pitch forcing the Turkish FA to take strong action against hooliganism.

Originally, Fernerbahce were ordered to play two home games behind closed doors but that was overruled later and women and children below the age of twelve were allowed inside the stadium.  Players from both the teams threw flowers into the crowd before kick-off as the game ended in a 1-1 draw.