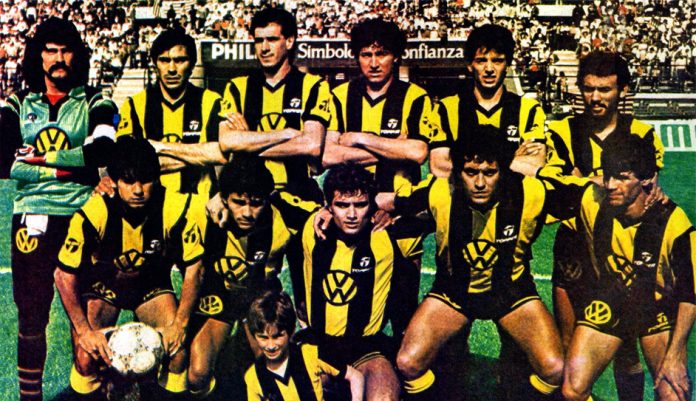 On this day in 2002, a club from Madagascar called AS Adema set a Guinness World Record by beating  Stade Olympique de L’Emyrne Antananarivo 149-0 in a play-off to determine the national championship.

What’s interesting is the fact that Adema did not score a single goal in the game. As utterly baffling as it may sound, it is in fact the truth. The national championship of Madagascar or the THB Champions League, is decided through a four-team round robin play-off. Before this epic clash, SO l’Emyrne had drawn 2-2 against DSA Antananarivo after the referee awarded a disputed penalty late in the game. This draw meant that the league crown went to Adema. Angered by the referee’s allegedly ‘wrong’ decision in awarding the penalty, SOE took a vow to protest in the meaningless last remaining match against Adema.

With nothing to lose, SOE kicked off the game and immediately put the ball into their own net. Adema players stood befuddled as their SOE counterparts went through the routine 149 times in total. SOE fans vented their anger out on the ticketing office by demanding a full refund.

The Fédération Malagasy de Football issued a three-year ban for SOE manager Zaka Be. Defender Mamisoa Razafindrakoto, who was the captain of the Madagascar national team, was handed a four-year ban along with three other players.

This unbelievable score line beat the previous record of 36-0 set by Scottish club Arbroath against Bon Accord back in 1885. A 36-0 win seems a bit dull in hindsight, doesn’t it?

On this day in 1987, Uruguayan side Peñarol won the Copa Libertadores by beating Colombian club America de Cali 1-0 in extra time.

This was Cali’s third successive appearance in the cup final which unfortunately turned out to be their third successive loss. The Colombians had lost the two previous finals to Argentinean clubs Argentinos Juniors and River Plate.

Cali made a promising start in the fixture by winning 2-0 in the first leg. The second leg went to the Uruguayans who won the match 2-1. The tie had to be decided through a play-off which was played at the Estadio Nacional in Santiago. Diego Aguirre scored in the dying moments of extra time and won the Libertadores for Peñarol.