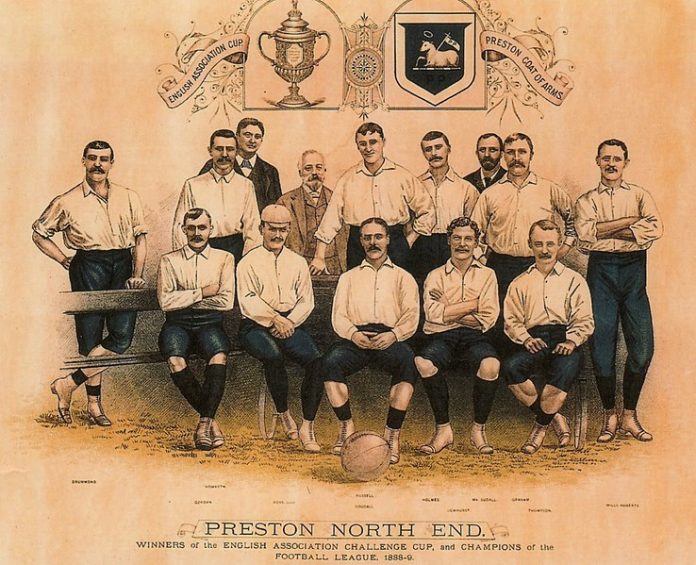 Today marks the 130th anniversary of one of the most ridiculous score lines in the history of the FA Cup. On this day in 1887, Preston North End beat Hyde FC 26-0 in a first round tie.

Played at Deepdale – the oldest continuously used football stadium in the world – Preston set two records in the match: most goals scored at home and the biggest winning margin. A 1958 edition of the North Cheshire Herald, reporting on the game, noted that there were periods in the match when Preston scored seven in 12 minutes or four in seven minutes. That is how relentless Preston’s attack was.

You could say that the Tigers received a good hyding. I will get my coat.

Preston scored 56 goals in the run up to the final of that season’s tournament. The next round saw them meet Bolton Wanderers whom they dispatched 9-1, a relatively dull affair by Preston’s standards.

They met West Bromwich Albion at the Kennington Oval for the final. Preston players were so confident of winning the game that they asked to take a photograph with the FA Cup before the match. To which FA President Sir Francis Marindin responded by saying: “Hadn’t you better win it first?”

That would have been ideal but they did not get an opportunity to get their picture taken after the match as well because George Woodhall and Jem Bayliss scored to give West Brom a 2-1 victory. Oh well.

The two best teams in the league, level on points at the top of the table, boasted two formidable records: Kansas City with the fewest goals conceded (29) and Chicago with the highest goals scored (67). Kansas edged Chicago however on goal difference, +18 to Chicago’s +16.

The battle for supremacy took place at the RFK Stadium in Washington DC. Kansas took an early lead through their Danish attacker Miklos Molnar whose 11th minute strike made all the difference. A certain Hristo Stoichkov played the full 90 minutes for Chicago.