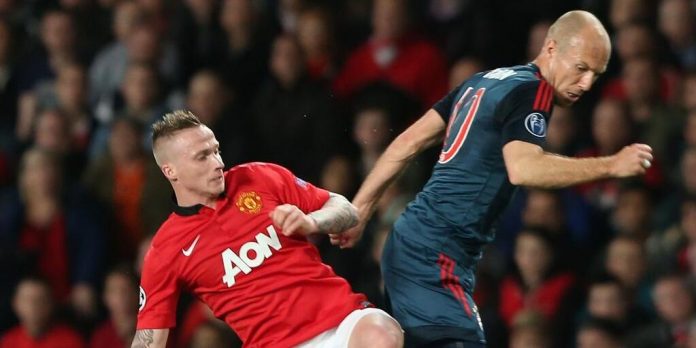 David Moyes has quickly become accustomed to people picking apart his tactical approach to games, but the latest criticism surrounding the way he deployed his team against Bayern Munich will probably feel more like a compliment than a rebuke.

Bayern’s players have almost been lining up to take pot shots at United’s tactics in the Champions League quarter-final first leg at Old Trafford on Tuesday, condemning the Reds’ defensive mind set.

Addressing German media, Dutch wide man Arjen Robben said “It was not easy, as our opponents didn’t leave any gaps. We wanted to play football but they tried to stop us. The English were just playing on the counter and have played very defensively, it was almost like in handball.”

The remark refers to the game, popular in Europe, wherein a team defends by lining up all of its players across the front of the goalkeeper’s area.

The mood was picked up by United target Toni Kroos who added: “It was difficult: we were dominant all the time. It’s very difficult to play against a team that consistently has all its players around their own penalty area.”

The criticism will surely please Moyes, and the Germans can expect more of the same in the return leg in Bavaria next week. Of course the European Champions would have preferred United to get into a slugfest with them that would played to the German team’s strengths, but that would surely have been folly for Moyes and United, and there’s certainly more than one way to skin a cat.

The home team’s tactics were totally vindicated when Nemanja Vidic headed United into the lead in the second half. The pressure then came on Bayern to battle back into the tie. An equaliser from Bastian Schweinsteiger has swung the tie back in the Germans favour, but there’s little doubt that Vidic’s goal was a shock to their system. It’s also undeniably true to say that, despite Bayern having 76% of possession, the clearest chance of the entire game was squandered by Danny Welbeck just before the break when his tame chip was blocked after being through on Neuer.

Again addressing German media, Robben commented that “when you go a goal down you have to be pleased with a draw.” And skipper Philipp Lahm summed up the situation by declaring that “We wanted to win here, but if you come back from 1-0 down you can be satisfied. It puts us in a good starting position.”

It undoubtedly does, and Bayern will be warm favourites to progress, but they can expect to face what Robben described as ‘handball’ tactics when Moyes’ team rocks up at the Allianz to conclude the tie, and if their marking at set pieces is as slack as when Vidic scored this week, Bayern may just end up being even more frustrated next week, than after this week’s game.