Michael Ballack’s testimonial on Wednesday night proved to be a fitting end to a career littered with loose ends.

A proverbial buffet of former and current international stars, with a combined caps total of over 1,600, rolled out in Leipzig, East Germany, on what was a gloriously royal affair; with 45,000 fans and well-wishers filling the impressive, Red Bull Arena to the brim.

A perennial nearly-man, or ‘unvollendeter’ (unfulfilled one), as he is sadly referred to in his home country, Michael Ballack came out trumps in his send-off match. The ‘Little Kaiser’ netted a hat trick, and received close to as much adoration and respect as his lovably oversized ego could manage.

The retiring German also sent his own message to the German people. After the terrible flooding in East Germany which has seen thousands of people evacuated after torrential rainfall, Ballack decided to donate a generous portion of the money taken from ticket sales to the charities involved in the rescue operation.

A magnanimous gesture, one that gave this wonderfully nostalgic night that little bit of extra meaning.

Ballack was a brilliant midfield general in his pomp; a player with effortless, often intimidating swagger, a thunderous left foot, and an indomitable spirit which saw him captain the German national side for the best part of six years.

One of the very best penalty takers in recent memory, his sweetly struck free kicks were also lethal commodities. Brilliantly accomplished at attacking headers, his vision was also a key feature of his game.

He used these talents to great effect in a career that saw him reach the pinnacle of German club football, and ply his trade for Chelsea in a largely successful spell abroad. It was, however, a career peppered with disappointment.

A runner-up in two Champions league finals, and two silver medals from the 2002 World Cup and the Euro 2008 saw Ballack earn his ‘loser tag’, and come to define an period of frustration for German football.

After having to contend with the might of the Brazilians in Korea and Japan 2002, Germany again came unstuck four years later against the defensive juggernaut that was Italy. Since then, their inarguable rise to prominence has been dramatically undermined by an incredible generation of Spanish talent.

But there was absolutely no chance of Ballack collecting another silver medal on Wednesday night. With twenty-one smiling faces joining him on the velvet pitch in East Germany, not so far from his home-town of Gorlitz, Ballack was given the freedom to roam.

Time stood still when he picked up the ball; and defenders almost bowed to the retiring German Prince as he was allowed to waltz past them, in search of those special goals to round off the special night.

The star-studded, World XI triumphed 4-3 over ‘Ballack and Friends’, while Mr Ballack had a go at playing for both sides!

His ex-Chelsea teammates, Didier Drogba, Michael Essien, Florent Malouda and Ricardo Carvalho all made the trip to Germany; while home talents included the now mythical, Lothar Matthaus, as well as Miroslav Klose, Chelsea-target Andre Schurrle, and Phillip Lahm. Even Formula One legend, Michael Schumacher, threw on a pair of boots for the occasion.

Lahm’s inclusion in the festivities seemed to prove that Ballack holds no ill-feeling to the man who took the national captaincy from him. Their war of words threatened to derail the German bandwagon in the 2010 World Cup in South Africa, with Lahm refusing to hand the captaincy back to the then injured Michael Ballack,

Lahm declared, on the eve of the German’s semi-final against Italy:

“I enjoy the role a lot. So why should I give the position up voluntarily?”

This open challenge from the terrier-like Lahm belittled Ballack’s apparent influence, and was arguably the beginning of the end of the midfielder’s tenure in the national setup. A public falling out with German boss, Joachim Low, also did nothing to sooth matters.

But it seems both hatchets were quite rightly buried on Wednesday, with Lahm taking his place in the guard of honour at the end of the game, and Low watching on as a personally invited member of the crowd.

Despite these side plots, which also included the mysterious Schurrle – Chelsea connection, with Jose Mourinho reportedly taking the opportunity to finalize a deal while managing the World XI, this was a night of celebration for one of Germany’s favourite sons. Personal loose ends were sown up, and the feeling of victory was keenly felt by the man of the moment.

His was a defining name in the recent history of German football, and Ballack should be remembered for his domineering presence, his swashbuckling demeanour, and for the great adventures he embarked on, at home and abroad; rather than his catalogue of ‘near misses’, and an ‘unfulfilled’ trophy cabinet.

Thank you, Michael Ballack, and farewell. 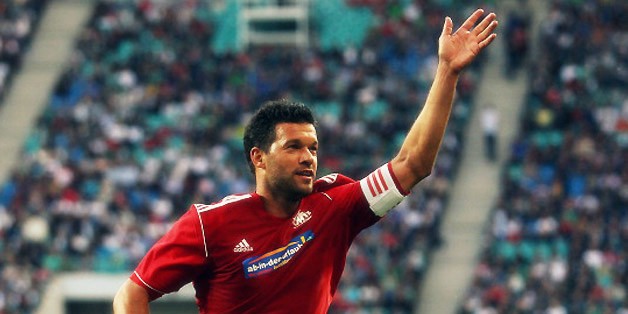