Marco Reus has been a long term target of Manchester United. The German attacking midfielder has been recently linked with a move to Liverpool and Bayern Munich as well this summer.

Last year, around November, The Times journalist James Ducker reported that Manchester United were keen to land Marco Reus and were preparing to use Shinji Kagawa as a part of the deal.

Last month reports emerged that Reus had rejected a contract extension at the German club. As a result of which, he will now able to leave Jurgen Klopp’s side for €35m, his release clause, that can be trigged from 2015. 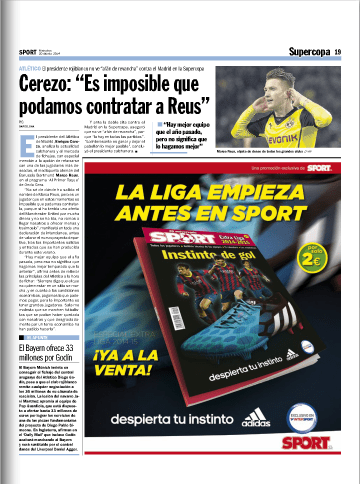 However, recent reports suggest that Atletico Madrid are emerging as strong favourites to land Reus. However, all such rumours are quashed to dust after Atletico Madrid president Enrique Cerezo clarified they were never in the race for the German star. He said as quoted by Sport:

“I don’t know how that rumours came up but It’s impossible that we can sign Reus right now, because he has an offer from United for a lot of money and he didn’t go, so we’re not just going to get there, offer him less money and he will come.”

What was interesting in his quote was the reference of Manchester United. He claims that Reus has rejected a big money offer from United this summer, which suggest that Atletico were probably informed about every details, when they tried to enquire about the player.

Liverpool have been recently linked with Reus as well, but having already signed eight players and surgery required elsewhere, hard to think that the Reds will put up a huge money bid to sign him.