Spanish newspaper AS have covered a story on Atletico Madrid’s immediate requirement to sign a central defender. Atletico have sold two of their key players – Mario Mandzukic and Arda Tura – to Juventus and Barcelona, but Los Rojiblancos have nicely replaced them with quality forwards in Luciano Vietto and Jackson Martinez.

Diego Simeone is now looking to add a quality central defender to his side, mainly to fill the void left by Miranda. 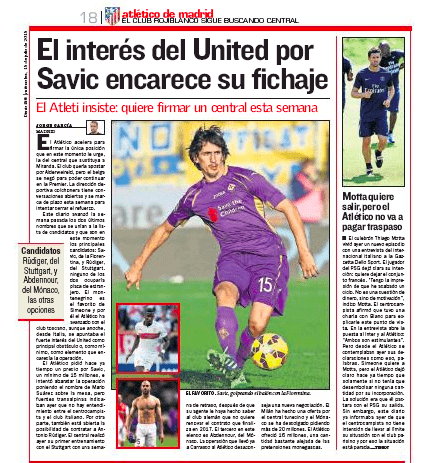 Atletico wanted to keep Toby Alderweireld, but the Belgium defender chose to remain in the Premier League and signed a deal with Tottenham Hotspur instead. The club therefore have made it a priority to sign a good central defender, as early as within this week.

According to the report, Fiorentina’s 24-year-old defender Stefan Savic has emerged as a strong option for Atletico. The Montenegro international is a personal favourite of Simeone, but Atletico are not alone in the race, as Manchester United emerged as their main obstacle in signing the former Manchester City defender.

Atletico were told before that Savic would cost around €15m. The club tried to reduce the transfer fee by including Mario Suarez as a part of the deal. AS reports that Fiorentina have received an expensive offer from United (much better proposal compared to Atletico’s offer) recently, forcing Atletico to shift their target elsewhere.

Antonio Rudiger now emerges as another possible option for Atletico. The Stuttgart defender only returned to training yesterday, after his agent made it known to the German club that his client would not renew his contract that expires in 2017.