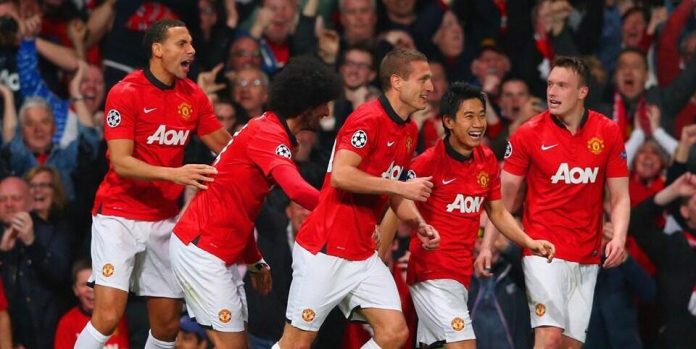 A spirited performance from Manchester United helped them carve out a 1-1 draw against reigning European Champions Bayern Munich to keep their quarter final tie alive going into the second leg at the Allianz Arena next week.

United opened the scoring with a looping header from Nemanja Vidic, before Bastian Schweinsteiger bagging the crucial away goal for the Germans less than ten minutes later.

Schweinsteiger was harshly sent off following a second booking late on for a crunching, but ball winning tackle on Wayne Rooney.

David de Gea 7/10: The Spaniard made a fantastic save to deny Robben in the first half and came out well to deal with balls from the flanks. He was helpless to prevent Schweinsteiger’s fine effort.

Phil Jones 7/10: The Englishman was effective in the first half and dealt well with Ribery’s darting runs on the right of the defence. Jones had to shift to left back after Buttner went off injured near the end, and Robben gave him a hard time.

Nemanja Vidic 8/10: The Serbian did a fantastic job to deny Thomas Muller a tap in from David Alaba’s low cross in the first half, and scored United’s opener with a brilliant looping header from Wayne Rooney’s sublime corner.

Rio Ferdinand 6/10: The 35-year-old had a great first half, hardly putting a foot wrong, but was to blame for Bayern’s equalizer.

Alexander Buttner 6/10:  The 25-year-old did a great job to nullify Robben’s threat on the left in the first half, but went off near the end following a pulled hamstring.

Antonio Valencia 8/10: A tireless effort from Valencia, who showed great energy throughout. Shifted to right back following Buttner’s injury, and handled well.

Ryan Giggs 6/10: Did little to influence proceedings, but was a cool head in the heart of midfield. Went off for Shinji Kagawa at the break as Moyes pushed for that first goal.

Marouane Fellaini 5/10: Poor distribution in the first half, lacked quality overall in the middle, and should have tracked Schweinsteiger in the buildup to Bayern’s equalizer.

Michael Carrick 9/10: A fantastic performance by the Englishman. Carrick sat very deep to aid his back four and with his excellent positioning and ball retention enabled United to build from the back and launch attacks of their own from the deep.

Danny Welbeck 8/10: His effortless and spirited runs in the channels caused the Bayern defense all sorts of problems at the back. Welbeck however missed a great chance in the first chance to open the scoring after he was one on one with the keeper thanks to Rooney’s layoff, but to the dismay of the Old Trafford faithful, he tried to go for an audacious chip and Neuer saved it easily.

Wayne Rooney 8/10: Rooney dropped deep rather than leading the line, playing in a number ten role, and provided a wonderful layoff to Welbeck to set him up which the latter failed to take advantage. The Englishman provided a sublime delivery from the corner to pick out an unmarked Nemanja Vidic, who headed home from the set piece.

Shinji Kagawa 6/10: The Japanese international was a little slow with his distribution, but won the corner that led to the opening goal.

Ashley Young 6/10: Hardly had time to make an impact.