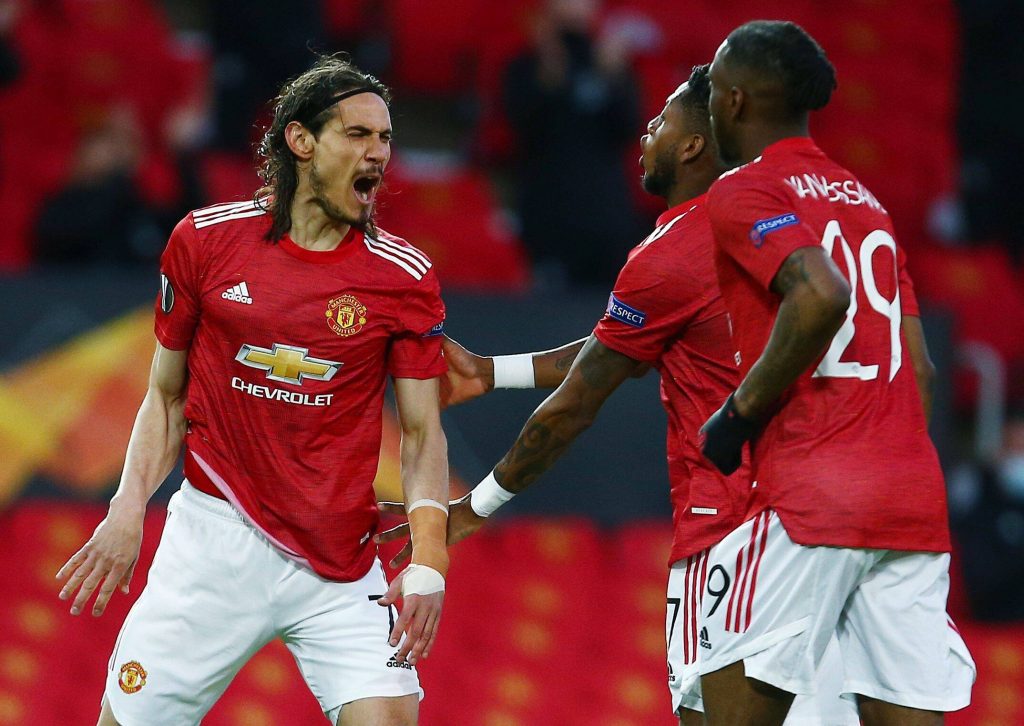 Manchester United defeated Granada 2-0 in the second leg of their Europa League quarter-final tie to progress through to the last four of the competition with a 4-0 aggregate victory.

Edinson Cavani’s first European goal for the club and a late own goal by Jesús Vallejo secured a win on the night for the Red Devils and sealed their semi-final place in the process.

Coming into the game, United manager Ole Gunnar Solskjaer knew that he was without three first-team players through suspension.

Luke Shaw, Harry Maguire and Scott McTominay all picked up yellow cards in last week’s first leg against the Spaniards, so had to miss out on the return fixture at Old Trafford.

Accordingly, Solskjaer made changes – five in total – to his side from Sunday’s 3-1 Premier League win away at Tottenham Hotspur, and United lined up as follows:

Meanwhile, Granada faced an uphill battle of trying to overturn a 2-0 deficit and also made five changes to their side from the last outing – a 2-1 victory over Real Valladolid.

With the game starting at a fast pace, it didn’t take long for the first goal of the evening to come, and it was the hosts who grabbed it in the sixth minute to put themselves firmly in the driving seat in terms of the tie courtesy of veteran Cavani.

Alex Telles floated a ball in from the left-wing, which was met by Paul Pogba, and he guided backwards to Cavani, who found himself in space towards the edge of the box. Without hesitation, the forward swung his boot towards the ball and guided it into the bottom corner of the net on the volley.

In doing so, he put his side 1-0 up on the night and 3-0 up on aggregate but also reached a personal milestone.

Granada weren’t going to exit the competition lying down, though, a theme that continued throughout the evening.

They could have provided a tougher test for the hosts had Manchester City loanee Yangel Herrera guided his header home two minutes after the opening goal.

Herrera met the ball from a corner and had goalkeeper David de Gea beaten, but the ball bounced agonisingly wide of the far post.

Ten minutes later, it was almost a carbon copy of that chance and outcome, but this time from a Granada free-kick. Once again, Herrera broke free of his marker Pogba – by this time on a yellow card – and stooped low to meet the ball but couldn’t turn it home.

Herrera’s missed opportunities were warning to United that the job wasn’t completely done and before half-time Solskjaer’s side did start to rally.

Midfield maestro Bruno Fernandes volleyed over the crossbar before dragging a shot wide, and Mason Greenwood hit a wayward effort that didn’t trouble Rui Silva in the visitors’ goal.

As the half-time whistle went, it was really a story of those missed opportunities for both sides. Cavani’s goal provided the only shot on target of the whole opening 45 minutes, so if the visitors were to mount a comeback, they’d have to work de Gea more for certain.

In an attempt to do so, they made changes at half-time and replaced both Kenedy and Soldado, who had been ineffective to say the least. On came Luis Suárez – not that one – and Antonio Puertas in their place.

Meanwhile, United also made a change at the break to prevent Pogba from earning himself a second yellow card and a suspension. 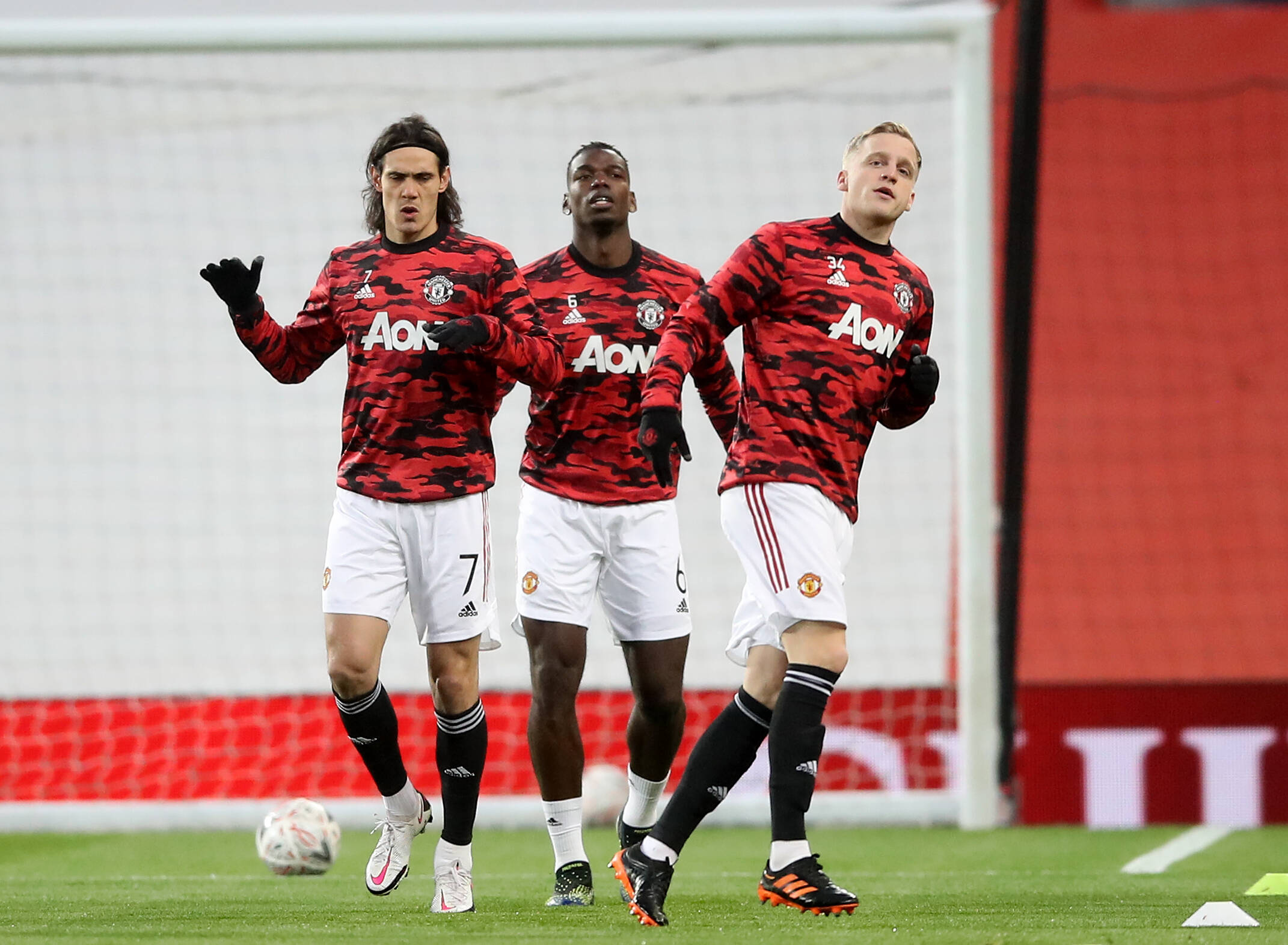 Donny van de Beek replaced him and got some much-needed minutes under his belt in the process, having only started two Premier League games since his summer transfer move to Old Trafford.

The substitutions seemed to have livened both sides up somewhat, and either could have easily had a goal within a minute of each other shortly after the restart.

Granada’s Jorge Molina – himself a first-half substitute – saw a tame header stopped by de Gea, which should have been a lot more challenging than it turned out to be, and then United broke up the pitch and should have had a headed goal themselves through Greenwood.

The young forward was in acres of space in the box but had to try and generate his own power on the ball following a poor cross and was unable to do so.

Missed headers continued to be a trend when goalscorer Cavani could only glance the ball wide off his shoulder when Fernandes picked him out superbly in the area. That proved to be the last action of relevance from the Uruguayan, replaced by Dan James on the hour-mark.

Van De Beek also dragged a shot wide following a strong run by Greenwood before the visitors tried to make their way back into the game, and the tie, committing men forward.

Granada’s plan almost worked when the ball fell to captain Germán Sánchez from a free-kick when the ball became tangled between a United defender’s legs.

Sánchez – a centre-back – was the first to react and hit a strike on the turn but saw the ball go wide of the goal, the story of the Spaniards’ evening.

In the last quarter of the game, substitutions were aplenty from both sides, including the experienced Juan Mata being brought on by Solskjaer in Fernandes’ place.

One of the visitors’ new faces – Víctor Díaz – rifled a shot at goal which was saved by de Gea before City loanee Herrera forced the ‘keeper into his best save of the game just a minute before the end of the game with a powerful header from close-range.

With the save, Herrera could have had a hat-trick of headers on the night but left Old Trafford without a goal to his name.

It then looked like the game would end 1-0, but there was still time for United to match their scoreline from the first leg and the second goal of the game came in unfortunate circumstances for the Granada defence.

Telles once more whipped in a ball from the left-hand side following a good passage of play by United and aimed it for the smallest man on the pitch in Juan Mata, who missed the ball but in doing so saw it hit the face of Vallejo and bounce into the back of the net.

Three minutes were added on, but there was no action of note and the game ended 2-0, as it had done in Spain last week, so United progressed through into the semi-finals as 4-0 winners on aggregate.

Who will they face?

Following their progress, Solskjaer’s side will come up against Roma in the last four of the Europa League.

Roma defeated Ajax 3-2 on aggregate to progress, and the first leg of the semi-final will take place at the end of this month.

In the other tie, fellow English side Arsenal – who defeated Slavia Prague – will face their old manager Unai Emery when they take on Spanish team Villarreal in the last four.