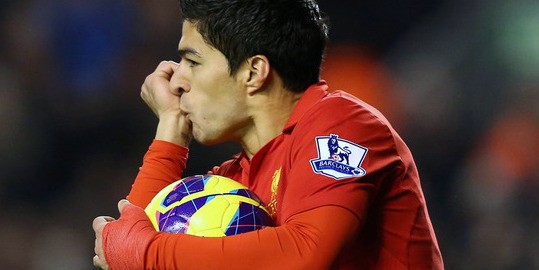 Liverpool have started their season brilliantly. Sitting comfortably on top of the league, they have registered three wins in a row, including a morale boosting victory against arch-rivals Manchester United at Anfield in their last match.

And this team can only improve from here on, when Luis Suarez will return to the squad, after serving his 10-match ban. A lot has been said, written about him and the transfer saga. It’s time he gets back to the football pitch, do what he does best and prove his true worth to the team.

Brendan Rodgers has insisted that Suarez will be shifted to the wings, when he returns allowing Daniel Sturridge to lead the attack upfront. The England international has been in terrific form this season, scoring in all the three games for the Reds, so far. Hence, he deserves that.

But, more than anything else, shifting Suarez out wide will benefit the team tactically. Suarez is not a typical number 9 rather he brings lot more to the game like Sergio Aguero or Carlos Tevez, with his work rate, and over-all involvement in the game. Yet, this is about a player, who scored 23 league goals last season. 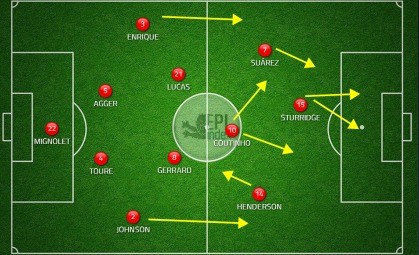 Jordan Henderson has been nothing short of sensational this season and his performance against Man Utd only proves that the lad is more than ready to play regularly for the Reds. When Suarez returns, Coutinho, another key player for Liverpool will be drifted into the hole, behind Sturridge. His incisive through passes, vision, and movement will be best utilized with him being deployed there.

It may seem like Suarez has been shifted wide in order to accommodate him into the side. Hell, no. Those who have watched him during his Ajax days will notice that he operates best from the wide areas (both right & left) only. Dribbling past players is a piece of cake for him. His intelligence makes predicting his movements a futile choice and just a waste of time and energy.

By drifting inside, he will allow space for Enrique (or left back) to exploit the zone. Even if hangs around the touch-line, he has the ability to dribble past the defenders and get inside the box, and create a dangerous attack. This will allow him create more scoring opportunities, without hampering the balance of the team.Rodgers knows best, doesn’t he?