As it was written in the ancient prophecies or the Dead Sea scrolls or some such Tyldesley-esque nonsense, Jose ‘The Self-Appointed Special One’ Mourinho will lead his Inter Milan team out against Bayern Munich in the UEFA Champions League final on the 22nd May.

A ten-man Inter side just about kept Barcelona at bay (how Barca would’ve loved to reach a final staged at the Bernabeu stadium – the home of their bitter rivals Real Madrid) for the duration of last night’s captivating semi-final clash at the Camp Nou, losing the second leg by a single goal but never-the-less ending the overall tie victorious with a hard-fought aggregate score of 2-3.

Bayern booked their place in the final the previous evening by sweeping aside a beleaguered Lyon side. A hat-trick from Croatian striker Ivica Olic ensured an embarrassing defeat for the French outfit in front of their home support and, added to Arjen Robben’s goal in the first leg, Die Roten advanced with a 4-0 aggregate win.

The German side will be missing their star man Franck Ribery for the final after the tricky winger saw red in the first leg of the semi-final for his attempt to split Lisandro Lopez’ shin in two, but given the Frenchman’s recent dip in form (no doubt connected to the scandalous controversy he currently finds himself mired in) his absence might not be as keenly felt as it could be.

One player that Bayern will hope keeps us his recent hot streak is Dutch winger Arjen Robben, whose sublime (and crucial) goals have helped steer his side through the latter stages of the tournament. The former-Chelsea man’s lightning acceleration and eye for goal will no-doubt prove decisive if he manages to turn up for the game with the right attitude – a trait that has dogged him at times throughout his career.

A rigidly consistent back four, coupled with a superb goalkeeper (Julio Cesar) and a world class screening midfielder (Esteban Cambiasso) combine to give Inter a well-drilled and compact block of defensive players that will be difficult for Bayern to break down, and when you add a wealth of attacking talent into the bargain (think Sneijder, Eto’o, Milito etc.) you can’t help but feel that the Italian side are overwhelming favourites to lift their first Champions League title in 45 years. 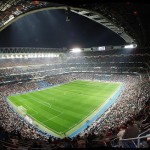 Jose Mourinho was only 2-years-old the last time Inter won the European Cup in 1965, and the Nerazzuri find themselves in the final for the first time since 1972. The Portuguese coach’s mastery of the art of grinding out results when results are needed is admirable and may well prove to be an important asset in such a high-profile face off.

A developing subplot is the relationship between the two opposing managers. Current Bayern Munich chief Louis Van Gaal was the man to call time on Jose Mourinho’s time at Barcelona. The Dutchman (installed as Barca coach in 1997) decided Mourinho was a unwanted remnant of the previous regime at the Camp Nou (Mourinho worked as a translator and assistant to previous manager Bobby Robson) and relieved him of his duties the following summer.

Will it be a case of the spurned student returning to prove his former employer wrong? Only time will tell, but what is certain is that whichever manager ends the evening with the Champions League trophy raised above his head will have earned his admission into a very exclusive club. Only two other managers have succeeded in winning the European Cup with two different sides – Ottmar Hitzfeld (Borussia Dortmund and Bayern Munich) and Ernst Happel (Feyenoord and Hamburg).

I, like most other right-minded football fans, am hoping for the open and expansive display of attacking football that such a showpiece game demands (a game that would’ve been almost guaranteed if Barca had made it through), but I feel we may be in line for a more cagey, catenaccio-based affair with tactics and counter-tactics abound – especially on Inter’s (or more likely, Mourinho’s) part.

The Special One’s men have arguably endured a tougher route to the final, having had to play Barcelona four times and Chelsea twice, but Bayern are finalists none-the-less and have managed to see off European heavyweights such as Manchester United and Juventus for their chance to compete for that most coveted of trophies later this month.

All-in-all, this year’s Champions League final promises to be a great match up between two teams with distinctively different styles and I, for one, cannot wait!

You can watch Bayern Munich take on Inter Milan live online as well as dozens of other European football games. Read our live Champions League football page for more details.