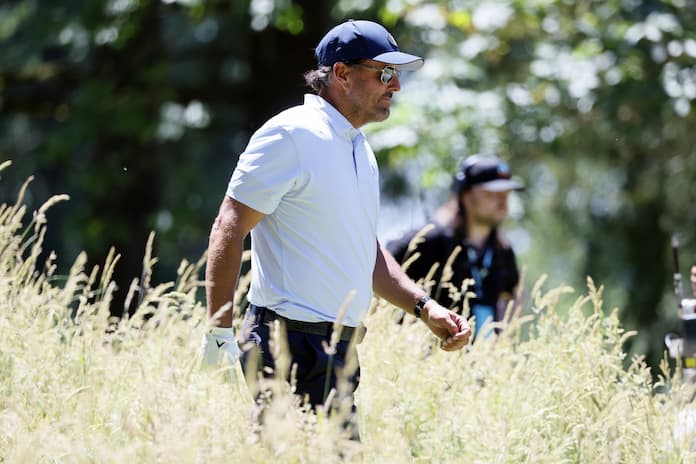 PHIL MICKELSON believes that he is on the winning side as LIV Golf is making huge strides forwards, meanwhile the PGA Tour is trending downwards. The six-time major champion insists that by joining LIV Golf he has picked the right side in the dispute that has dominated golf for months.

‘I’m On Winning Side’, says Mickelson

After leaving the PGA Tour in favor of the Saudi Arabi-funded LIV Golf tour along with several high profile golfers, Phil Mickelson believes he has made the right decision and is enjoying life at LIV.

To give you a bit of a background, LIV Golf is a new golf initiative. It is similar to the PGA tour events in that there is a field of golfers who are competing to win. However, the difference lies with the prize money, field size and competitiveness.

LIV Golf puts $25 million prize money up for grabs each individual tournament, which is over three times the amount of a standard PGA Tour event. The winners share is over $4 million of this.

In terms of competition, there is only a 48 player field, which is far less than on the PGA Tour. There is also no ‘cut’, so players aren’t worried about not making the weekend. As well as this, the event only runs for three days with 54 holes of golf played, unlike 72 holes on the PGA and European Tour.

Prior to the LIV Jeddah event, which gets underway today (Friday October 14th), Mickelson reiterated that he is on the winning side and that he is happy with LIV Golf.

“I think going forward you have to pick a side.

You have to pick what side do you think is going to be successful. I firmly believe that I’m on the winning side of how things are going to evolve and shape in the coming years for professional golf,” said the 52-year-old.

Mickelson, who reportedly received a $200 million fee just for joining LIV Golf, believes that both the PGA Tour and LIV Golf are going to change and evolve, but that he has picked the right side of the battle.

“I see LIV Golf trending upwards, I see the PGA Tour trending downwards and I love the side that I’m on. I love the way they involve us and listen to us in decisions.”