Robert Lewandowski has been in sensational form this season for Bayern Munich. The Polish striker has scored 24 goals this season for the German champions in all competitions, and several top European clubs are vying for his signature next summer.

Premier League heavyweights like Chelsea, Manchester United, Manchester City, Arsenal and Liverpool have all been linked with a move for the 27-year-old, while La Liga giants Real Madrid have also registered an interest in him. 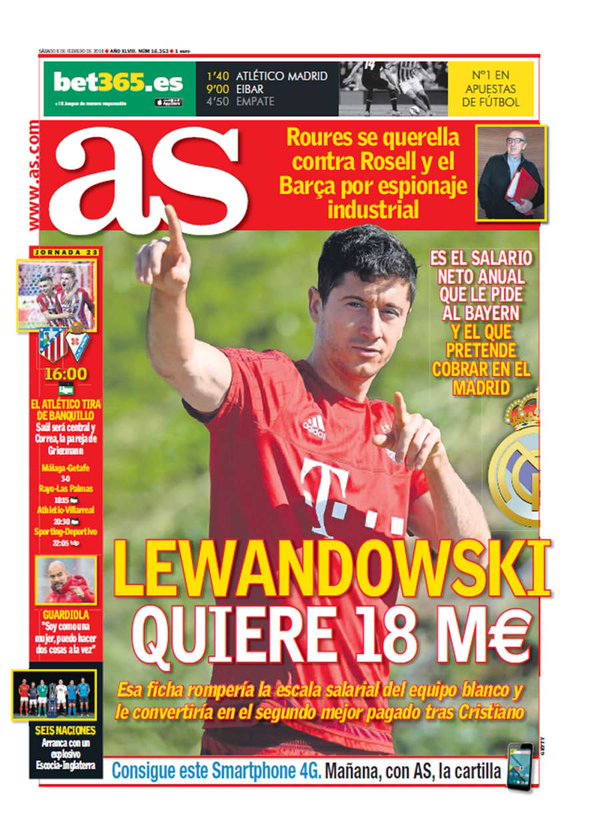 This season Lewandowski has taken his game to a new level. He has always been a good finisher, but under Pep Guardiola, the Pole striker has improved on other areas of his game.

Although Lewandowski is happy at Bayern, he still could be persuaded to leave the club with a big money offer. If the reports are to be believed, he would cost in the region of £70m, and his price tag is a big put off for many top European clubs.

He also might consider the option of playing in a more competitive league like the Premier League or the La Liga. At 27, he is approaching the peak of his career, and it is high time for him to test his calibre at a different platform.

Keeping these factors in mind, let us take a look at which clubs could go for him in the summer.

United desperately need a world class striker in the summer and could make a move for the Polish international. Skipper Wayne Rooney can’t be relied upon for goals, while Anthony Martial is young and inexperienced.

While Lewandowski may consider the factor of missing out European football (Chelsea likely to finish outside top four) but he could still be tempted to move to West London with a big wage package.

Pep Guardiola is not comfortable working with two strikers at the same time. But he can easily rotate the two strikers, and protect his first choice striker Sergio Aguero from getting injured too often. Having two world class strikers in the side would not only increase City’s chances of winning the Premier League title, but will give them an extra edge in European competitions as well.

As mentioned earlier in the article, Madrid have set their sights on the Pole striker. In Benzema, Bale, and Ronaldo, they have one of the best attacking trios in the world and there are few teams in the continent that can match their attacking strength. However, Benzema remains the only orthodox #9 in the side, and probably a reason why Zidane wants to add another quality striker next summer.

Ibrahimovic is fast approaching the fag end of his career, while Edinson Cavani is reportedly unhappy at the club and he is more likely to be sold in the future. Lewandowski could be tempted with a massive pay package to lead the attacking lines at the Parc des Princes.