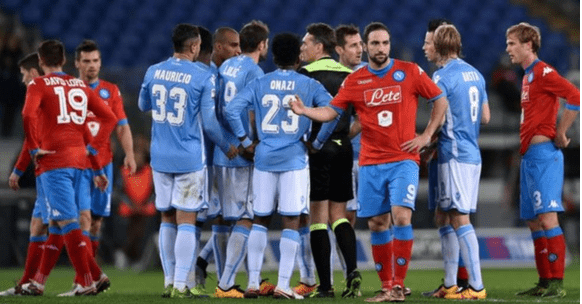 Serie A club Lazio have been handed a heavy fine after the racist abuse directed at Napoli defender Kalidou Koulibaly.

According to reports from Fourfourtwo, Lazio have been fined €50,000 and ordered to shut the Curva Nord, a section of the stadium, for two games following the racial abuse suffered by the Napoli defender on Wednesday.

During Napoli’s 2-0 win over Lazio, Koulibaly, the Senegal centre-half, was the subject of boos, whistles and discriminatory songs from a section of Lazio supporters.

The situation almost went out of control at the Stadio Olimpico, forcing referee Massimiliano Irrati to stop the game in the second half for approximately five minutes.

Serie A confirmed that the Curva Nord, a section kept for Lazio’s ultras, will be shut for two games.

Furthermore, Lazio have also been fined €15,000 for chanting directed as the visiting Napoli support.

It is indeed a shame that racism has been allowed to infiltrate at this level, and Lazio should take severe actions against the fans for such an unacceptable behaviour.

This is not the first time an incident of this nature has affected Lazio. In February 2015, M’Baye Niang and Edenilson were subject to racist chanting at the Olimpico while playing for Genoa.

Lazio are a prestigious club with a strong global fan base. Such incidents only tarnish the brand image of the club. We can only hope that Lazio take lessons from it and work hard to prevent such incidents from happening again in the future.