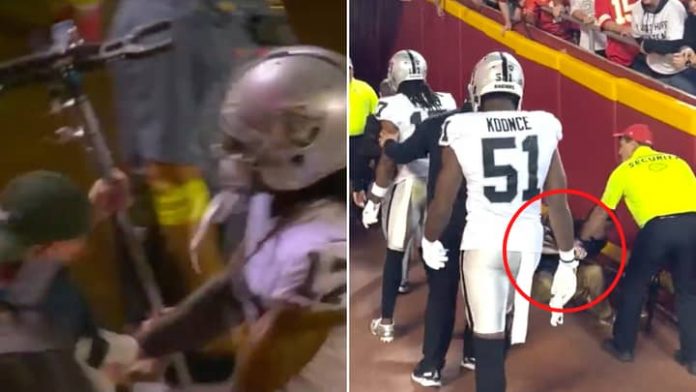 Following a spur-of-the-moment shove on a sideline photographer, Devante Adams has since been charged with misdemeanour assault after a police investigation.

The Raiders led the Chiefs 17-0 in the first half but a staggering comeback led by Kansas’ Patrick Mahomes and Travis Kelce culminated in a 30-29 win.

It leaves Las Vegas treading water in the AFC West having lost four of their opening five games, and for a side expected to compete for a post-season spot the frustration among the players and fans was clear to see.

Indeed, none more so than wide receiver Devante Adams who crossed paths with a freelance ESPN photographer as he exited the field at full time. The five-time Pro-Bowler proceed to floor the bewildered Ryan Zebley, who has since come out to suggest he suffered whiplash as a result of the shove.

Devante Adams attempting to push his way out of LV, and back to Green Bay 😭💀#Packers #Raiders #KCvsLV pic.twitter.com/SdQqbVXCQa

Following the incident on Monday, charges were filed on Wednesday morning in Kansas City where the police have described the incident as an ‘intentional, overt act’ that caused whiplash, a headache and a possible minor concussion.

Adams will also certainly land in hot water with the NFL who are likely to issue a fine and a possible suspension for his actions.

The highest paid non-quaterback in the league took to Twitter to issue an apology after the game, saying: “He jumped in front of me coming off the field. I kind of pushed him. He ended up on the ground.

“I want to apologize to him for that. That was just frustration mixed with him really just running in front of me.

“I shouldn’t have responded that way, but that’s the way I responded. I want to apologize to him for that.”

Whatever sanctions the league decide to issue Adams may have a detrimental effect on the Raiders’ already stuttering season. They will be hoping to avoid a suspension given he has He has 29 catches for 414 yards and five touchdowns so far in his debut season in Las Vegas.