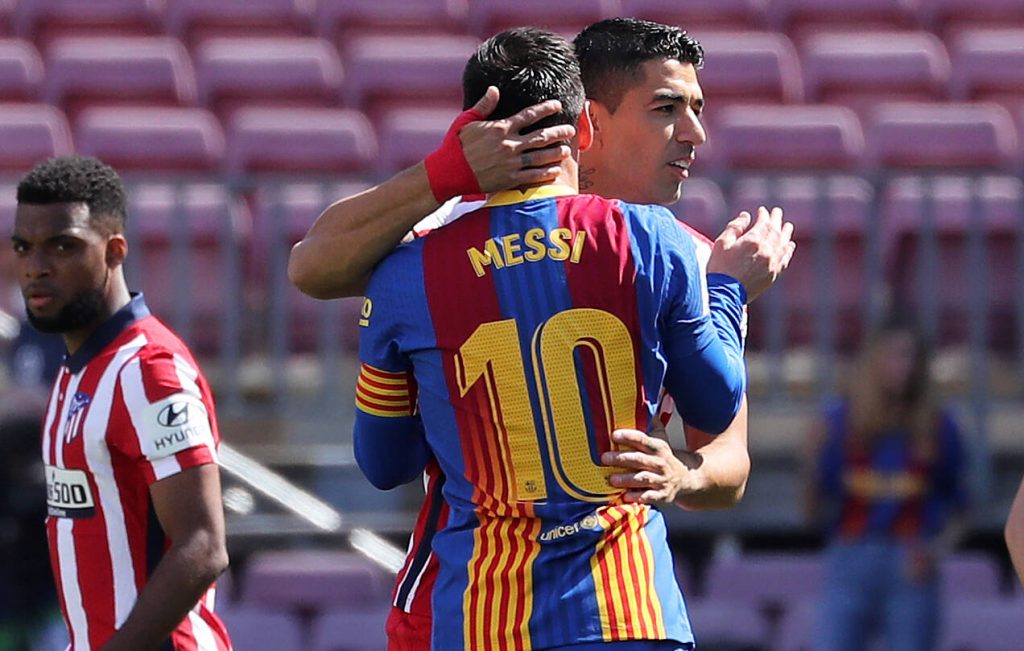 In what looked set to be a crucial round of fixtures in the La Liga title race, points dropped by Atlético Madrid, Barcelona and Real Madrid leaves us with no clear title favourite with three games left to play.

Atlético maintained their two-point lead at the top of the La Liga table despite their stalemate with the Catalans on Saturday afternoon, while Madrid also drew with Sevilla on Sunday night in an entertaining 2-2 clash.

The tense race for La Liga glory will continue, and with the unpredictable nature of the chasing pack’s results, we can expect plenty of surprises as the season draws to a close.

Victory over Atlético at Camp Nou would have sent Barcelona top. However, they remain two points behind Los Colchoneros and third in the standings due to Madrid’s superior goal difference.

It took the Blaugrana 40 minutes to register their first clear sight on goal. Lionel Messi picked up the ball just inside Atlético’s half and glided past six red and white shirts before forcing Jan Oblak into a smart save.

The Atlético stopper was alert once more to save a fierce free-kick from Messi in the 65th minute.

Jordi Alba found space down the left-hand side and sent a cross into the box, which the onrushing Dembélé could only head over with the goal at his mercy.

It marked a frustrating afternoon for the Catalans who have ground to make up with little time to do so.

There will be no room for error in Barcelona’s three remaining games of the season, and a lack of composure in the final third must be promptly addressed by manager Ronald Koeman if they are to end Madrid’s reign.

In truth, a disciplined Atlético side deservedly took a point back to Madrid and could have easily stolen all three with man of the match Yannick Carrasco lively throughout.

All eyes turned to Sunday’s showdown at the Estadio Alfredo Di Stéfano between Madrid and Sevilla after Atlético and Barca’s goalless draw.

For Madrid the objective was clear, secure a victory and they would take control of the title race.

Easy right? Unfortunately not, as 21 minutes into the encounter and Zidane and his men found themselves a goal down after a wonderfully worked free-kick from Sevilla.

Suso played the set-piece short to Jesús Navas, who cut inside and crossed a wicked ball into the Madrid penalty area.

Ivan Rakitic’s header dropped to the feet of Fernando Reges, who showed brilliant composure to cut back past Casemiro and guide the ball past Thibaut Courtois.

Madrid pressed for an equaliser before half-time but Sevilla stood firm, with goalkeeper Yassine Bono twice called into action.

However, the Moroccan international could not keep out Marco Asensio’s near-post effort in the 65th minute, as Toni Kroos picked out the substitute a minute after he had come on.

As Eder Militao had leapt to clear a Sevilla corner, the ball had hit his outstretched arm. There were immediate calls for a penalty, but the referee had not seen it and suddenly Madrid were on the counter.

Karim Benzema ran clear and rounded Bono only for the Frenchman to be bought down by the Sevilla stopper.

A penalty was immediately awarded to Madrid. However, their celebrations were short-lived as referee Juan Martínez Munuera was called over to the VAR monitor and after careful consideration, pointed to the Madrid spot for Militao’s handball.

Rakitic showed his composure as the former Barcelona man stepped up and sent Courtois the wrong way to put his side ahead on the night once more.

As the clock hit the final minute, it looked to be a memorable night for Sevilla with victory moving them within a point of third-placed Real.

However, there was a final twist in the tail as Kroos’ shot deflected in off Eden Hazard’s foot to level the scoring in the fifth minute of stoppage time.

Despite salvaging a point from the game, the frustration was clearly visible from Los Blancos as they remain two points behind Atletico.

Although Atlético’s fate now lies in their own hands, two of their remaining three fixtures come against European chasing Real Sociedad, and relegation-threatened Real Valladolid.

Both sides will need to secure maximum points from their remaining league outings, and so it is the league leaders who are faced with the trickiest run-in.

All three of Real’s remaining games come against sides in the top half of the La Liga table.

Europa League finalists Villarreal are battling it out for European qualification for next seasons’ campaign, whilst Granada and Athletic Bilbao will be aiming for strong finishes to the season.

Barcelona’s final three tests pose as the easiest run-in out of the title contenders, however currently sitting third, there is no room for error for the Blaugrana.

Nine points from nine is an absolute necessity for the Catalan giants, and a final trip to Eibar, who are desperately battling it out to avoid the drop, will pose as a stern test on the day the La Liga crown will probably be decided.