India
Home News klinsmann in bradley out as us national coach 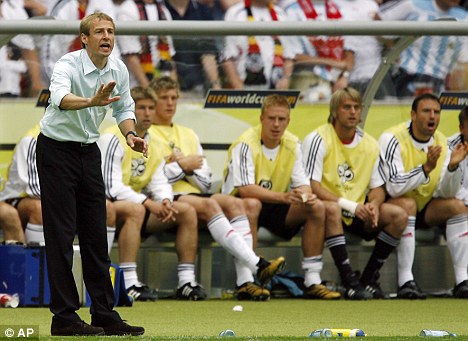 In a coup d’état so swift it could represent the final guillotine strike in a pepole’s revolution, Bob Bradley has been replaced as manager of the United States Mens’ Soccer team by Jürgen Klinsmann. It shares many of the same characteristics as a popular uprising – a ruthless governer ousted for a friendlier man of the people. However, it is not: it’s a reactionary move by elements within U.S. Soccer which replaces an effective coach with a crowd-pleaser.

Over the past twelve months, Bob Bradley has certainly cast cold eyes around the management world. Before the start of last season he was thought to be in the frame to replace both Roy Hodgson at Fulham and Martin O’Neill at Aston Villa; during the year he was named as a “person of interest” by Blackburn Rovers and (again) Villa Park administrators. Rumours persisted he lusted for a European job after four years of National Service and ten before that of MLS management.

It was not for any wandering eye that he was dismissed, but for the sake of perception alone.

Also See: Jurgen Klinsmann: The making of an icon.

On the back of defeats to Panama and Mexico in the Concacaf Gold Cup, the U.S. National Team has fallen to 30th position in the latest FIFA rankings. This is hardly a body blow to the sport, but inconvenient coming so soon after a successful Women’s World Cup. That “the coach” was replaced by “the PR guy who does some coaching” is an admission that soccer matters more than ever in the United States. After the Women’s World Cup final rated extremely well on television (more highly than the MLB All-Star game) and the crowd were taken with the performances of Hope Solo, Abby Wambach and Megan Rapinoe, U.S. administrators have made this decision in aims of capitalising on that raised profile.

In the U.S.A, more than ever since the ’94 World Cup, perception now matters in soccer. This is one of the steps the association execs needed to take to help boost it to the level of hockey, basketball, baseball and American football.

Like in many of the new frontiers -North America, East Asia, Australia and the Middle East – World Cups successfully pique Joe Public’s interest only for the passion to fall away between successes or big tournaments. The first step was the marketing succes of the 1994 World Cup. This single event was the foundation on which MLS was built – the second big step. Soccer was raised from occasional peripheral flickers in the national consciousness to a nominal public awareness between Cups. While the league is hardly a paragon of stability, it has brought football to the masses much more effectively than the old NASL.

With the startling public interest in the Women’s World Cup in Germany, this has changed again. The push to eliminate the staid Bradley and replace him with Jürgen “The very definition of urbane” Klinsmann stinks of a company trying to improve its stock after a brand breakthrough. The interest in the U.S. Women’s Team was so great that the outspoken Solo, little-recognised before the Cup, boosted her Twitter followers from 10,000 to over 200,000. Famously, 7196 Tweets per second (TPS) were recorded during the final, mostly emanating from the two countries involved. Women’s soccer in the U.S.A. will benefit from this exposure, if perhaps only temporarily. With numbers like those witnessed two Sundays ago, there’s little doubt a World Cup Final involving the Men’s Team would be the most watched sports event in American TV history.

Also See: Klinsmann: USSF wouldn’t give me 100% control of USMNT.

Considering they’ve approached the California resident twice before, U.S. Soccer must smitten. If Klinsmann – charming, approachable and with a player’s credibility – duplicate some of that interest himself, providing even a 10% boost in national interest in the team, the bean-counters at HQ will be proud and he will have fulfilled his function.  When you appoint a manager with Klinsmann’s moderate record, it speaks volumes of the administration’s priorities: boost the profile of U.S. Soccer.

To do that, however, means he must be more than a smiling salesman. He must coach because nothing drives recognition like results. A poignant example can be taken from MLS ranks – the Seattle Sounders, while not having the greatest wells of talent, boast an average attendance over 50% greater than the next highest, Los Angeles after making the conscious decision to pursue the U.S. Open Cup and Concacaf Champions’ League football. Other factors enter into this: the Seahawks aren’t great, the Mariners stink (again!) and the Supersonics now play in Oklahoma City meaning the landscape was open for a new side. Seattle also is part of the great Pacific Northwest Soccer Mom tradition. But make no mistake, Seattle has embraced the Sounders not just because they’re there, but because they’ve made a name for themselves. As is true in business, success breeds success.

Whether Klinsmann can bring the US National Team success is a far more puzzling – and more important – question. His reign as Germany manager sparkled, but since subsequent failure at Bayern Munich and the success his heir (and assistant) Jogi Löw has had managing die Mannschaft, questions have been raised over Klinsmann’s tactical acumen and overall devotion to duty. Fair or not, Germany’s 2006 World Cup Semi-Final appearance is now attributed almost evenly between the two. Himself a flying striker, Klinsmann’s preference for attacking flair left Bayern defensively suspect and his position as manager under the microscope.

However if Klinsmann plans on playing attacking football with the players who represented the US at the Gold Cup, he may be sorely disappointed. In many ways, he’s the diametrical opposite of his predecessor. Where perhaps the dour Bradley’s greatest strength was knowledge of his players’ abilities, Klinsmann is allegedly a shrewd man-manager who will take time to really familiarize himself with his charges.  Even if he’s the second coming of Sir Matt Busby, his first hire should be the best football tacticians he can find – simply because his reputation for that aspect of the game is his greatest weakness.  In the current age of sports science, it’s nearly impossible to inspire a player without a solid tactical and athletic foundation.

By reinforcing perceived weak spots – rightly or wrongly – he will have done exactly what his employers at U.S. Soccer have done. With the speed by which Klinsmann superseded Bradley, they must have felt Bradley’s supposed weaknesses had suddenly become too great to bear in what they hope to be a time of growth. Results then gave them a chance to trade up for the nearly Messianic figure they’ve coveted for years now. But should Klinsmann not be able to bring on-field success to the national setup, his potential failings will perhaps haunt U.S. Soccer for longer.