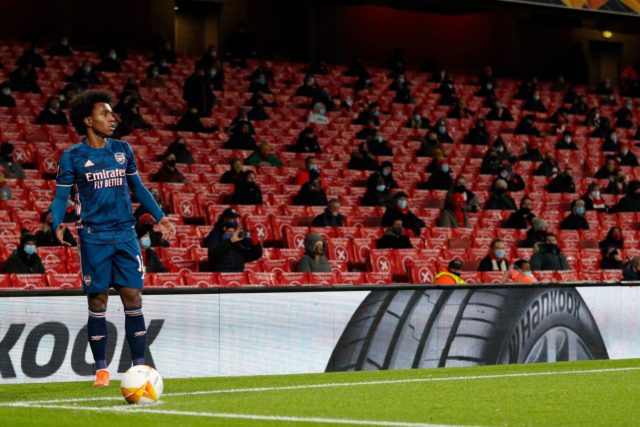 Tottenham Hotspur will face Arsenal in the Premier League clash on Sunday, where Jose Mourinho will come up against his former player in Willian.

Willian – who played under Mourinho at Chelsea – joined the Gunners in the summer when his contract ended at Stamford Bridge.

The Portuguese boss has insisted that Willian is still a ‘dangerous’ player and admitted that he keeps in touch with the Brazilian winger.

Tottenham were one of the clubs reportedly interested in signing Willian in the summer, but they didn’t make any serious attempt to broker a deal.

When asked whether he tried to sign the former Chelsea winger, Mourinho replied:

“We don’t have money for Willian. We cannot pay the wages that he gets at Arsenal so I didn’t want to waste our time because we cannot pay these wages.”

Willian reportedly earns around £190k-per-week wages at Arsenal, which is really high for a 32-year-old player, albeit one who signed on a free transfer.

However, the argument of wages being an impediment in his signature hardly hold ground, given Spurs signed Gareth Bale from Real Madrid on a season-long loan.

According to reports from the Telegraph, Spurs are paying £9 million in wages for Bale. Spurs chairman Daniel Levy has negotiated a deal under the terms where the north London club will pay £220,000-a-week of his £600,000-a-week Real wages.

If the reports are to be believed, Spurs could extend that deal for another year, if the loan spell turns out to be a success.

Therefore, the suggestion that Spurs didn’t ‘have money for Willian’ is not completely true.

Mourinho was ready to spend the money to bolster Tottenham’s attacking department, and he took the gamble on Bale, who undoubtedly is a world-class winger.

Willian is a versatile attacking midfielder, but Spurs will not regret missing out on him. He has provided only three assists in the Premier League and has struggled for consistency thus far.