The World Cup is a global event, with the event being televised across nearly 200 nations, 6 continents and reaching billions of people. Those numbers are staggering, considering that only 32 countries make it to the main event. This essentially means that there are quite a number of adopted countries and a large amount of ‘neutrals’ who view the biggest footballing tournament once in four years.

This neutrality does offer up some opinion that may just hinge on a bias, with many struggling to remain completely neutral for the entire tournament without developing an attraction stemming from either good football/players or club associations. You’d get a lot of Uruguay supporters in India because Luis Suarez plays for them and the club has a large base in Asia.

But despite this neutrality, no team is probably more out-rightly hated  across the World Cup than Greece. You do get ‘haters’ for the likes of Spain & Brazil, solely because they are successful and more successful than your favourite team. But Greece is neither of that, yet they have a large base of anti-supporters who were absolutely devastated that they somehow managed to make it into the round of 16, defeating Ivory Coast with a stoppage time penalty. 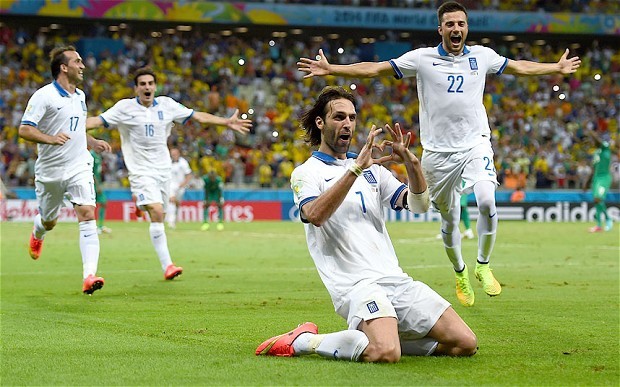 The reason for this animosity towards the Euro 2004 winners stems from what viewers see as their excessively defensive approach to the game. It is true, Portuguese manager Fernando Santos does employ a more defensive system for his Greek side. They rely on their back line to get the right results and have qualified for the round of 16 having scored just two goals, conceding four, and now have a decent enough chance of reaching the quarter-finals with their second round opponents Costa Rica (though excellent) not posing as the most difficult opposition..

So while they do have Samaras, Mitroglu and many more, it’s only fair to rate the best and most important Greek player from this tournament as one of the members of their defensive line. And of the lot, the stand-out performer has been Kostas Manolas.

The 23-yr-old Kosta Manolas plays with Olympiakos in the Greek Super League and first caught attention when he played against Manchester United in their 2-0 win in the Champions League. His ability was evident then and he has translated it onto the pitch now.

Like the rest of the Greek set-up, Kostas is extremely solid at the back, able to maintain his line and hold his own in an organised system. He has the ability to frustrate opposition by sitting deep which is sometimes falsely called “parking the bus”. Manolas is the sort of defender who can mark an opponent for the entire 90, and keep him out of the game.

But the most exceptional characteristic of his performance ability is the manner in which he recovers if an attack is played in behind him. Manolas is extremely quick on his feet, rare for a solid defender of his type and for someone in the Greek squad. There are times where balls can be played behind him creating a speed chase between the attacker & defender, more often than not, Manolas is able to come out on top. He combines his speed & strength to beat the attacker pace for pace, and hold him off in tricky situations.

Despite possibly being at fault against Colombia for their early opening goal, Manolas was arguably the best Greece player and certainly was the best on the pitch in the first half before the Colombian’s flair set-in. He put in a solid shift against Japan as well, a match in which they earned a 0-0 draw despite being down to 10 men (though that may have more to do with the Asian’s inefficiency, than the Greek’ superiority).

Manolas has thus far had 2.3 successful tackles per game and 1.3 interceptions (according to WhoScored) putting him at par with Giannis Maniatis.

His role will again be crucial against Costa Rica in the round of 16, a team who rely more on their full-backs than a central creator, which means that Joel Campbell alone up front may well be in for a quiet game up against Manolas.

You may not like this Greek side but they certainly are capable of getting the right results. They may not be entertaining, they may not put on exciting football, but they’ll get victories. Isn’t that ultimately important at the World Cup?