Colombia began their 2014 World Cup campaign with a bang this afternoon, knocking three past a helpless Greece, with winger Juan Cuadrado running riot for the South Americans.

Fiorentina winger Cuadrado was exceptional throughout, setting up former West Ham defender Pablo Armero for the opening goal after just six minutes, before his slaloming run late on gifted James Rodriguez with the chance to make it three, a chance the €45m Monaco man duly took, putting the seal on a superb win, and lifting Colombia up to top spot in Group C.

The match started brightly, with both sides quick on the ball, looking to test the respective defences. Georgios Samaras was particularly bright for the Greeks, playing in an unorthadox wide role, and running confidently with the ball.

But it was Colombia that took the lead through Armero, with his shot creeping over the line in the sixth minute after a wonderful flowing move that included the ferocious run from Cuadardo and a cute dummy from Rodriguez.

The Colombians celebrated wildly in what will be an enduring image taken from Brazil 2014, but their party had only just begun.

Teófilo Gutiérrez, who was charged with providing the goals in the absence of star striker Radamel Falcao, doubled his side’s lead just before the hour, tapping in a corner after some woeful defending from the Greeks.

The game looked over, but were it not for a terrible miss from Greek striker Theofanis Gekas, the outcome may have been very different. With an open goal gaping, the Konyaspor striker contrived to head against the bar from just a few years out, arguably shattering the Greek resolve.

Colombia pushed on after the let off, and rounded off the win perfectly thanks to James Rodruigez, who slid in after another daring run from Cuadrado. 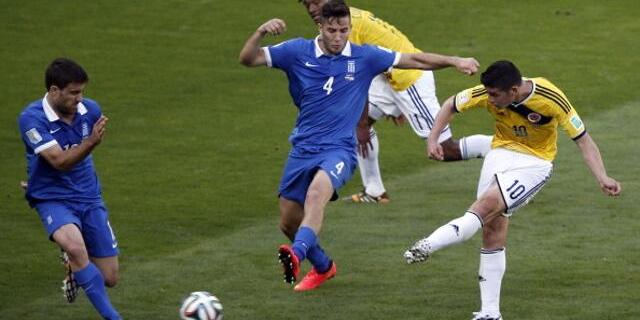