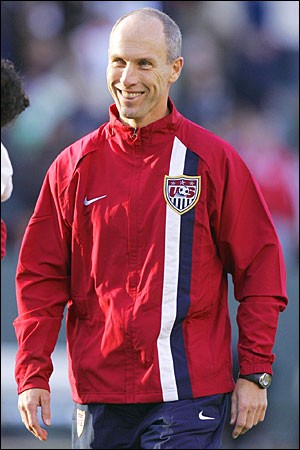 There were a number of questions facing the U.S. heading into their Gold Cup quarterfinal against Jamaica. A regional power that was considered by some to be an underdog, the U.S. entered the match as a team struggling to finish and without their best player Landon Donovan in the starting lineup.

Yet the Yanks took advantage of their strength in midfield, dominating possession and controlling the flow of the match. Adding a few finishes in the second half, and benefiting from a questionable red card, the U.S. put on their best performance of the Gold Cup and advanced to the semifinals to be played in Houston Wednesday night.

Coming into the match the U.S. were understandably wary of Jamaica’s ability to counter attack. Aware of the Reggae Boyz speed, the U.S. put their foot on the ball and played keep away for much of the match. The U.S. successfully carrying out that game plan limited the Jamaicans to only a handful of counter attack chances.

While the U.S. dominated possession from the beginning the finishing took some time to show up. After a number of quality chances were squandered in the first half the U.S. finally broke through in the second half.

It took 49 minutes but Jermaine Jones – who was on a yellow card – hit a low driving shot toward the Jamaican goal. The shot seemed destined to find goalkeeper Donovan Ricketts but a deflection off Houston Dynamo defender Jermaine Taylor redirected the shot above a lunging Ricketts for the U.S. game winner.

Jones and Taylor found themselves connected again 17 minutes later when the streaking American midfielder sold a foul on the Jamaican earning him an ejection. With Taylor the last line of defense, an apparent foul from behind caused the referee to reach for the red card despite the replay showing little to no contact and changed the complexion of the match.

of a Clint Dempsey goal. The final tally was the product of a good counter attack and a nifty feed from first half sub Juan Agudelo – who entered early in the match for the injured Jozy Altidore who left with a left hamstring injury – and secured the win for the Americans.

– Anderlecht midfielder Sacha Kljestan put in a standout performance today linking well with his teammates. His only downgrade would be his inability to get shots off.

– Landon Donovan and Clint Dempsey arrived in the wee hours of Sunday morning and were concerns for the match. Reports on twitter had Dempsey arriving at 2AM and still able to make the start. However, the same report had Donovan arriving at 7AM and that contributed to his starting on the bench. Bedoya put in a very good 65 minute shift in place of the LA Galaxy and US star.

– Jamaican goalkeeper Donovan Ricketts was the man of the match for the Reggae Boyz despite the score line. The LA Galaxy stopper was very good and was the only reason Jamaica was in the game at half time.

– Commend Carlos Bocanegra and the U.S. back line. At a distinct speed disadvantage the U.S. defense was solid technically and with their positioning and kept the Reggae Boyz from getting behind them.

Now the U.S. awaits the winner of the nightcap between Panama and El Salvador to know who they’ll face in Houston Wednesday night.