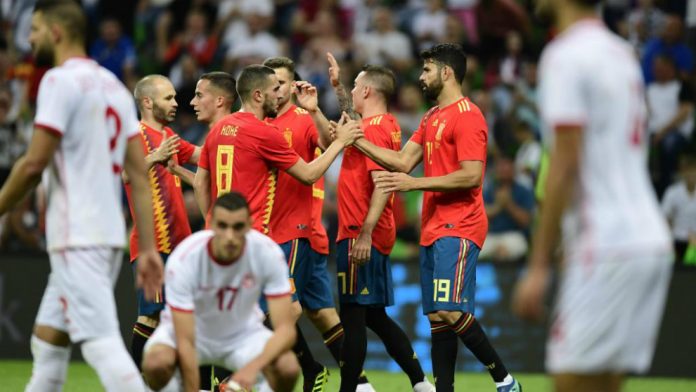 As we enter World Cup 2018 opening week, a host of participating nations played out their final friendly fixtures on Saturday night.

Teams such as Spain, Denmark, France, Mexico and Australia were all in action, with contrasting results.

Meanwhile Mo Salah has spoken out about Sergio Ramos and provided an update on his fitness, while there is injury news from Colombia and Argentina.

Liverpool and Egypt star Mo Salah has spoken out about the challenge from Sergio Ramos in the Champions League final that has his World Cup participation in the balance.

While the Spanish defender had previously stated the flying African attacker had sent him a message stating he was OK, Salah has contested the fact.

“My comment is that it’s always OK when the one who made you cry first, then makes you laugh. Maybe he could also tell me if I’m going to be ready for the World Cup?

“I hope to play the first game against Uruguay, but that will depend on how I feel when it approaches.”

Should Spain win Group B and Egypt finish as runners-up in Group A, the pair could well be reunited in the World Cup round of 16.

It took a late goal from Spain’s back-up forward Iago Aspas to claim a slender 1-0 victory over Tunisia in Krasnodar.

The Africans had their chances in a game that did not go all the Europeans’ way, but the Celta Vigo attacker settled the game in La Rojas’s favour.

France would have hoped to record a morale-boosting win over the United States ahead of their tournament opener, but could only draw 1-1 in Lyon.

Les Bleus found themselves 1-0 down after Julian Green’s strike, with Kylian Mbappe coming to the rescue to ensure the spoils were shared.

Christian Eriksen scored one and created another as Denmark beat Mexico 2-0, while Serbia put in an impressive showing to beat Bolivia 5-1.

Colombia have announced they will be without defender Frank Fabra for the World Cup after he sustained a cruciate ligament injury during team training.

The 27-year-old was expected to be the South Americans’ starting left-back and a replacement is set to be named shortly.

To claim World Cup bragging rights, sign up for the Sportslens predictor competition ahead of the tournament.