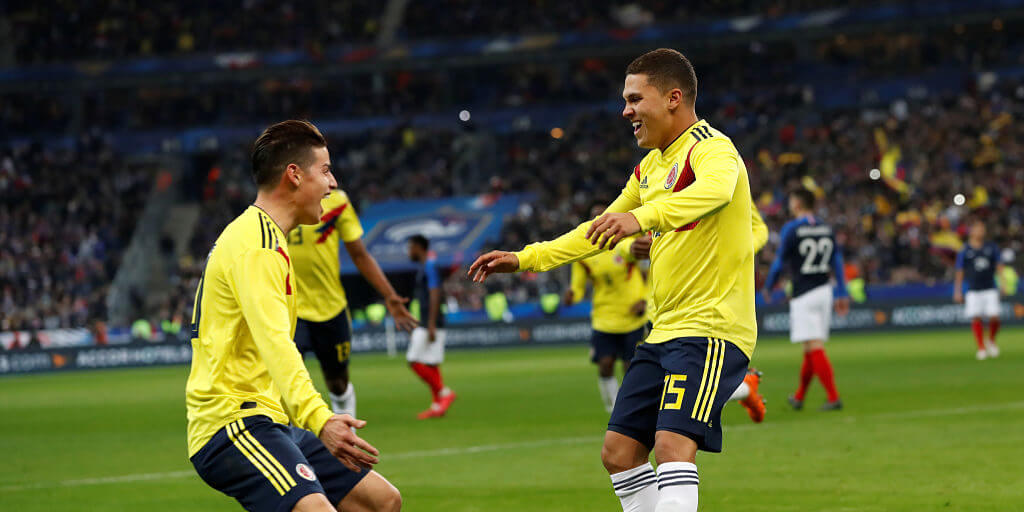 With no shortage of firepower and a recent international friendly win over France in Paris under their belt, Colombia arrive at the World Cup in Russia as a team capable of mixing it with the best.

The South American nation took their foot off the gas in the final rounds of qualifying but were still relatively comfortable in ensuring their place in the global showcase.

Colombia bring an unpredictability to the World Cup, with a feeling that the side could be devastating or abject dependant on the mood of the day.

A large number of Colombia’s players are household names in European football, with a sprinkling at the very top clubs in the world game.

Others have moved into neighbouring South American countries and it is fair to say that the squad looks physically strong and fast.

If the more-refined attacking options can fire, Colombia will be a dangerous proposition.

While the final 23-man squad had not been revealed at the time of writing, there are a number of recognisable faces not on the plane to Russia.

Stalwarts such as Pablo Armero and Juan Zuniga’s time with the national side has come to an end, with the experienced pair making way for fresher-faced replacements.

Jeison Murillo’s absence is something of a surprise given that the centre-half is highly regarded in Europe and has played consistently for Inter Milan and Valencia in recent years.

Ageing Argentine Jose Pekerman has been in charge of the Colombian national side since 2012 and as such has a close bond with the players.

He led La Tricolor to the quarter-finals of the World Cup four years ago, where they played some exciting attacking football before being knocked out by hosts Brazil.

Colombian fans have relatively high expectations for Russia and as such this may be the 68-year-old’s swansong in the role if a similar outcome to 2014 is not achieved.

Colombia have attacking players in midfield and attack but Pekerman has tough selection decisions to make ahead of the tournament.

Regardless of who he picks, the South Americans are likely to line-up in a 4-2-3-1 or 4-4-2 formation, with a focus on pace in wide areas.

The heart of the Colombian team boasts physicality and aggression and Pekerman’s side can play high-paced football.

The mercurial midfielder was one of the standout performers in the World Cup four years ago, but his career has stagnated somewhat since.

Rodriguez moved to Real Madrid in 2014 but it has taken a loan switch to Bayern Munich to reinvigorate him this season.

While the 26-year-old does not currently look as dynamic as he once did and has been operating in a slightly deeper role for Bayern, he remains Colombia’s creative fulcrum.

A top-class player capable of doing something incredible, the World Cup is the ideal opportunity for Rodriguez to silence his doubters.

A raw talent that has started to deliver on his potential, Muriel was part of a Sevilla side to make it to the Champions League quarter-finals in 2017-18.

Pekerman’s options in the centre forward role will be the envy of many rival coaches, with Radamel Falcao, Carlos Bacca and Duvan Zapata all in with a chance of starting.

While Muriel has been playing as the furthest man forward for Sevilla, it may well be that he operates from wide for Colombia.

His dribbling ability and unpredictability mean he could be a match-winner but he has a job on his hands to win a starting berth in the side.

Group H is one of the toughest to predict, with all of the four teams in with a realistic chance of progressing to the knockout rounds.

Most people will fancy Colombia to achieve this and not many teams would eye the South Americans up as an easy opponent in a do-or-die 90 minute clash.

While ambitions of reaching the business end of the tournament may be one step too far, Pekerman’s outfit could claim a scalp or two before being eliminated.