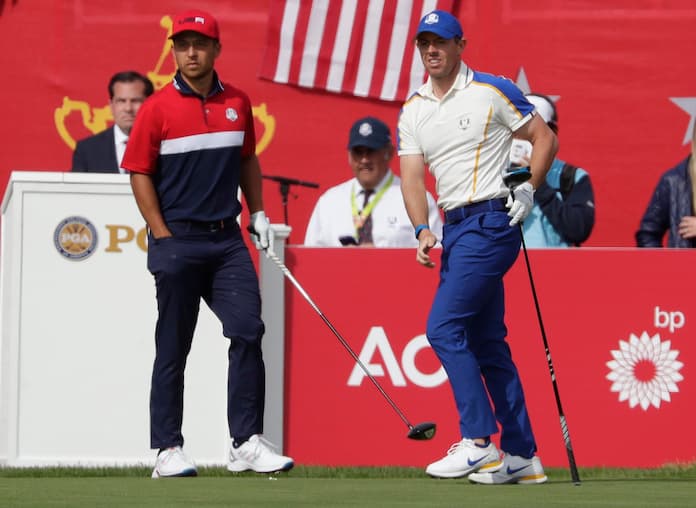 With less than a year to go until Europe and the USA lock horns in the 2023 Ryder Cup, European captain, Luke Donald, has stated that next year’s tournament can ‘unify’ the sport of golf.

With the controversy surrounding the LIV Golf Invitational Series and the crisis golf seems to be in right now, Luke Donald believes the 2023 Ryder Cup can unify the sport as it is “bigger than any individual”.

Since the Saudi Arabian-funded LIV Golf Invitational Series was launched earlier this year, tensions have been extremely high in the world of golf. The PGA Tour and DP World Tour have opposed the LIV Tour, with golf being divided massively in the past few months.

Some of the best players in the world and biggest names on the PGA Tour, such as Dustin Johnson, Brooks Koepka, Cameron Smith, Bryson DeChambeau and Phil Mickelson to name but a few, have switched their allegiance to the LIV Tour.

Henrick Stenson, who was originally set to be the Europe Ryder cup captain for next year’s event, also moved across to the LIV Golf Invitational Series. Consequently, Stenson was stripped of his captaincy, with Luke Donald taking over as the new European skipper.

The Englishman believes that the Ryder Cup has the capabilities of unifying the game of golf, and can bring the sport together for a spectacular week of golf action next September.

“The history of the Ryder Cup is vital really. The Ryder Cup is bigger than any individual player and it’s a great way to unify everyone,” said the 44-year-old.

“I think it will continue to do that. What’s so great about the Ryder Cup is that it does garner an interest in a new generation of players and fans to this game,” said the former world number one golfer.

With the controversy around the LIV Tour and both the ethics and morals surrounding the new golf initiative, USA captain, Zach Johnson, has suggested that any LIV players will not be eligible for selection in his 12-man team.

The 2023 Ryder Cup gets underway next September from Marco Simone Golf & Country Club in Rome, Italy. Europe are undefeated on home soil in over 30 years, so Johnson and his fellow US team will be looking to break that duck in Italy next year.

Another question posed to Johnson, the former multiple major championship winner, is whether golf legend Tiger Woods will be involved with Team USA next year. Johnson is sure the 15-time major champion will play a huge part, and admits he already has.

“I can tell you right now, I don’t know whether he’ll be here next year, but he will be part of this team in some capacity. He already is frankly,” said the former Open and Masters champion.

“I can’t put this mildly; he loves the Ryder Cup. He wants to be a part of it as best he can. He and I will be in constant communication,” said Johnson.

With less than 12 months to go until the biggest tournament in the sport of golf, lets hope any tension and problems between the LIV Tour and both the PGA and DP World Tour’s can be resolved.

Here is a list of Bovada‘s prices for the 2023 Ryder Cup: