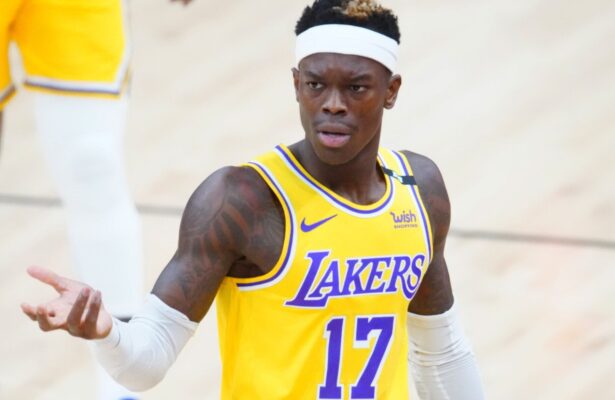 Lakers point guard Dennis Schroder is expected to miss at least three weeks of the season, after undergoing successful thumb surgery on Monday.

Schroder underwent surgery on his right thumb on Monday, with the German successfully having a ligament repaired after picking up the injury against the Minnesota Timberwolves last week.

The 29-year-old was unfortunate to miss out on most of the Lakers pre-season, with visa issues frustratingly limiting the players time on the court.

However when Schroder did get his chance, the point guard only featured on the court for nine minutes during the Lakers penultimate pre season match against the Timberwolves which the side lost 118-113.

Schroder was re-signed by the Lakers for this season, after enjoying time in both Boston and Houston last year with the Celtics and the Rockets.

Dennis Schroder is back in the building. pic.twitter.com/GpyPmlZKFT

When he played for the Lakers during the 2021/22 season, Schroder averaged 15.4 points and 5.8 assists through 61 games as a starter for Los Angeles.

Despite the Lakers missing Schroder for their opening night matchup against the Warriors on Tuesday, they will be boosted by the return of Anthony Davis to the team who is expected to return after missing pre-season due to a stiff back.