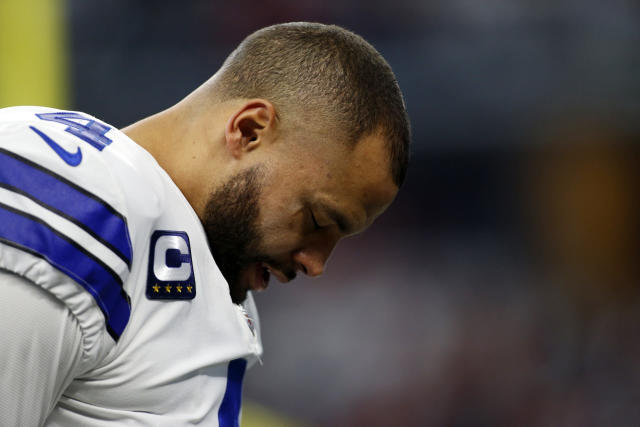 Dallas Cowboys quarterback Dak Prescott is set to have surgery on his hand following a thumb injury he sustained during the Cowboys opening weekend defeat to the Tampa Bay Buccaneers.

Prescott was forced off the field in the fourth quarter on Sunday, with the quarter back initially thinking he had picked up only a minor injury following his collision with Shaq Barrett.

It was in the locker rooms after the game when the QB realised how serious his injury was, as the X-ray’s showed a fracture in Prescott’s left thumb which requires surgery.

Dak Prescott will meet with the medical staff Monday and surgery on his injured thumb will follow.

Read how he plans to approach his injury ⬇️#TBvsDAL | @BankofAmerica

The 29-year old expressed his frustrations in both the result and his injury after the game, explaining the struggle not being there for his team.

“It’s very disappointing,” Prescott said. “But injuries happen. You can’t necessarily control it. It’s just unfortunate, obviously going to miss some time, not be there for my team. That’s what hurts more than anything, especially after the start we just put out there. Wanting to be able to respond and not necessarily having that opportunity for several weeks.

“Yeah, it’s unfortunate, but I’ll do what I’ve always done any time adversity comes. Take it on headfirst, give it my best, and I’m sure I’ll come out of this thing better.”

Prescott is set to have surgery on his thumb on Monday afternoon however Cowboys fans will not be seeing their star QB back in action for over six weeks.

With their starting QB out for the significant future, the Cowboys are expected to opt with Cooper Rush for their next match as they take on the Cincinnati Bengals on Sunday.