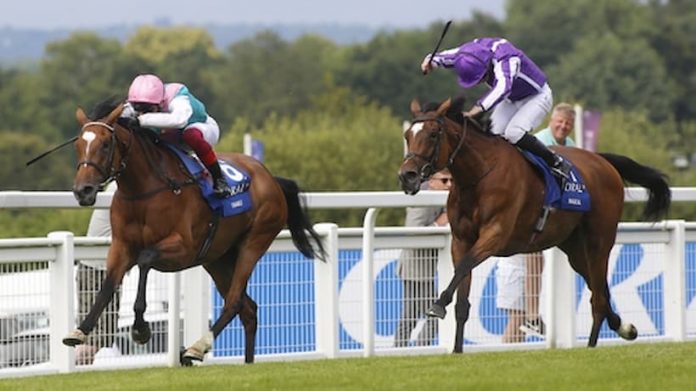 Plenty of great Coral Eclipse winners over the years since the race was first run in 1886. So, as we build up to the 2022 Coral Eclipse Stakes at Sandown Park this Saturday (2nd July), we’ve picked out our favourite Coral Eclipse scorers from the last 30 years – let’s take a look.

We’ve also got the latest betting from 888Sport ahead of the 2022 Coral Eclipse from Sandown racecourse. Plus, get they’ve a top free bet to snap-up to use on this Saturday’s race. (Bet £10, get a £30 FREE Coral Eclipse Stakes Bets)

RELATED: Who Will Win The Coral Eclipse 2022? Pros and Cons For The Runners

Coral Eclipse Winners – Six Of The Best Sandown Scorers Since 1993

A huge superstar of recent times that ended her career recently with a haul of 15 wins from 19 races – not bad, hey? Trained by John Gosden, she landed the 2019 Coral Eclipse in a hard-fought battle with Magical by 3/4 of a length with Frankie Dettori riding.

That win gave both Dettori and Gosden their fourth Coral Eclipse success in this famous Group One, but a year later (at the age of 6) Enable was unable to defend her title – finishing a gallant second to Ghaiyyath in 2020.

Did you know? The only 6 year-old winner of the Coral Eclipse was in 1886 (the races first running)

Another Coral Eclipse winner for the Frankie Dettori and John Gosden combo when they teamed up on that year’s Epsom Derby winner to follow-up in the 2015 Coral Eclipse.

He powered home to an easy 3 1/2 length win over The Grey Gatsby that day at Sandown as the heavily-backed 4/9 favourite.

Golden Horn only raced as a 3 year-old after heading off to stud – he was in action on the course 9 times – winning 7 and finishing second twice, so was never out of the first two. He added the Irish Champions Stakes and the Prix de l’Arc de Triomphe to his wins later in that 2015 season.

The 2009 Epsom Derby winner tackled the older horses for the first time in the 2009 Coral Eclipse and took that leap up in his stride – to win the Sandown Group One by 1 lengths from Rip Van Winkle as the 4/7 favourite.

He also only raced at 3 and now stands at the Gilltown Stud in Ireland at €150,000. He went onto win the Juddmonte International, plus the Irish Champions Stakes and the Prix de l’Arc de Triomphe later that season to firmly cement his place in the modern day hall of fame.

Over his 9 race career, we won a remarkable 8 times – with his only defeat coming on debut at the Curragh as a 2 year-old (4th). He gave trainer John Oxx his sole winner in the race, but provided jockey Mick Kinane with his fourth Coral Eclipse win.

Had a reputation during his racing days as one of the toughest horses around. He refused to lose and if other horses got into a final furlong tussle with him – there was normally only one winner!

He landed the 2000 Coral Eclipse and in the process gave trainer Aidan O’Brien his first win in the race – O’Brien went onto win the race five more times, including 12 months ago (2021) with St Mark’s Basilica.

Giant’s Causeway’s Coral Eclipse win saw him outgun Kalanisi by a head at odds of 8/1, with jockey George Duffield doing the steering – this was Duffield’s only ride on the horse!

He went onto race only as a 3 year-old after retiring to stud at the end of 2000 – winning 9 of his 13 races and being placed in the first two in them all!

A popular grey that was owned by Godolphin and provided jockey Frankie Dettori with his first Coral Eclipse win in 1998, but was giving trainer Saeed Bin Suroor his third winner in the race at that time.

The horse won the Eclipse as a 4 year-old after being kept in training after a decent 3 year-old campaign. He raced on until he was a 5 year-old too, winning races all over the world – including in America and Ireland, while he also added the 1999 Coronation Cup to his CV a year after winning the 1998 Eclipse.

Overall, he raced 21 times with 11 wins that included 7 Group One successes.

This 1993 Coral Eclipse winner gave top Irish jockey Mick Kinane and leading trainer, Sir Michael Stoute, their first Coral Eclipse successes – this was Kinane’s only ride on the horse during his 18-race career. Kinane went onto win the race four times in total, while Stoute’s current Eclipse haul stands at six (and counting).

Opera House also provided Shiekh Mohammed with his second Coral Eclipse winner after taking the race in 1985 with Pebbles.

He saw off Misil by just a short head in the 1993 Coral Eclipse and backed up that win by taking the 1993 King George VI and Queen Elizabeth Stakes at Ascot. In total, he raced 18 times – winning 8 – and being placed in the top three 15 times.

All odds correct as of 08:42 BST on Saturday, 2 July and subject to change