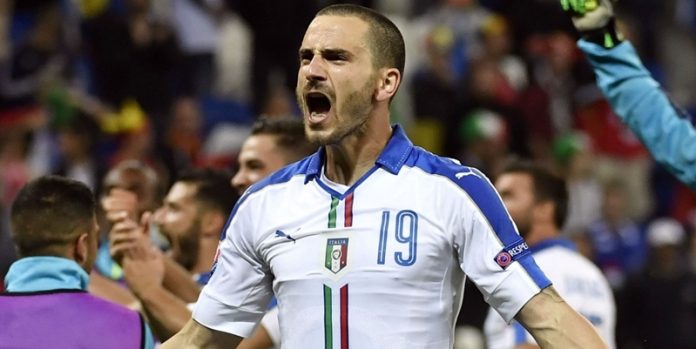 According to Italian newspaper La Gazzetta dello Sport, Chelsea have joined Manchester City in the race for Italian defender Leonardo Bonucci. The Juventus centre-back, who is currently holidaying in the Mediterranean, is said to have told close friends that he is considering a move away from the Serie A champions, with both Chelsea and City waiting in the wings.

Gazzetta have also claimed that City have already offered €60m for Bonucci, with €8m to go to the 29-year-old across a potential five-year contract. Juventus are yet to respond to the reported offer, with officials said to have fielded multiple calls yesterday from the Premier League side regarding the Italian.

Chelsea, meanwhile, completed the signing of N’Golo Kante from Leicester in the week, and are said to be very interested in Bonucci, who played under new Blues boss Antonio Conte in Turin when the Italian managed Juve.

Under Conte, Bonucci won three consecutive Serie A titles, with the defender going from strength to strength in the years after Conte left, becoming one of the best centre-backs in the game. Conte and Bonucci linked up again in the recent European Championships in France, with the defender one of the stars of the tournament.

Bonucci would be a huge signing for either club, with City currently in the middle of a Guardiola-prompted overhaul and Chelsea similarly reshaping their own squad to suit new boss Conte.

The likes of Martín Demichelis and Eliaquim Mangala could be surplus to requirements in Manchester, with captain Vincent Kompany also reportedly at risk of losing his spot in the heart of defence.

At Chelsea, John Terry is coming to the end of his career while Gary Cahill’s uncertain displays at Euro 2016 could be enough to see Conte bring in new blood to revitalise the defence.