The Champions League final will be a German grudge match, with Bundesliga rivals Bayern Munich and Borussia Dortmund set to go head-to-head at the Wembley Stadium on Saturday, May 25th. Both sides have been good value for their place in the final, with each overcoming top European sides on their way to the last hurdle.

The two teams have been embroiled in a domestic power struggle over the last number of seasons, with Bayern wrestling back the Bundesliga title this year after back-to-back Dortmund successes. The sides are contrasting; Bayern with their big names and established players, against the youthful and free-spirited Dortmund. 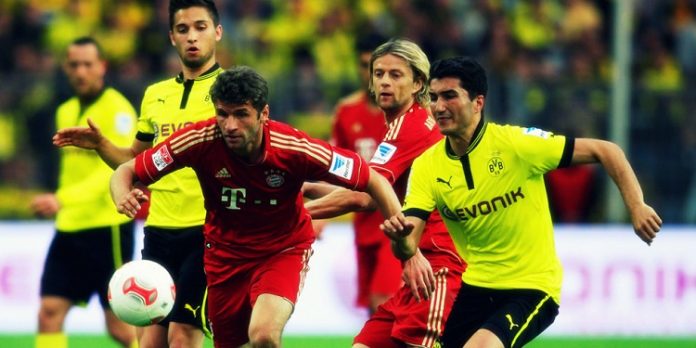 Both teams are very attacking however, and you can place a bet now in the ‘both teams to score’ market – Bayern are still favourites to win the Champions League with the odds of 5/2 with William Hill. Dortmund can also be backed in this market at the odds of 6/1.

Bayern have looked unstoppable this term, winning 27 of their 32 Bundesliga games so far. Impressive performances in Europe have seen them overcome Arsenal and destroy Barcelona – Jupp Heynckes’ men go into the game as favourites. With Pep Guardiola set to take over in the Allianz Arena hot-seat next year and Mario Gotze moving from Dortmund, Bayern will hope this will be the first of many successes in years to come.

Bayern will be cautious of the chance of an upset however, as they were favourites against Chelsea this time last year and ended up in second place. That said, this Bayern side looks markedly more aggressive, focused and talented than the one that was beaten on penalties in the Champions League final by the English side.

Dortmund may well have relinquished their Bundesliga title, but Jurgen Klopp’s men have been outstanding in Europe. Cast in the group of death alongside Real Madrid, Manchester City and Ajax, the German side topped the pool. A 4-1 victory over Madrid in the first leg of the semi-finals was their most impressive showing of this year’s Champions League.

With Gotze, sharpshooter Robert Lewandowski and prodigious talent Marco Reus in their ranks, Dortmund will know they have the ability to score against Bayern’s usually miserly defence. However, it is whether Mats Hummels and Neven Subotic can block out their opponents’ vast attacking threat at the other end that may well decide the game.

The sides met recently in the Bundesliga, with the game ending in a 1-1 draw at the Signal Iduna Park. That game may not be a true reflection of what the final holds as both teams rested players, however the Champions League match-up at Wembley will be full of personal battles and should be a very close contest.