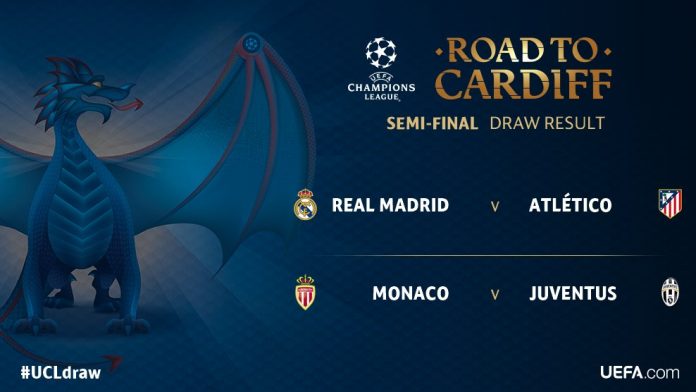 Real Madrid, Juventus, Atletico Madrid and Monaco made their way into this season’s Champions League semi-finals after some sensational performances in the last round.

The semi-final draw was completed in Nyon earlier today, following the completion of the quarter-final ties on Wednesday.

Defending champions Real Madrid will be hoping to become the first team to retain the title by winning the trophy once again this season. Meanwhile, the likes of Juventus were outstanding in the previous rounds and Max Allegri’s men will be looking to go all the way this year.

Leonardo Jardim’s fearless Monaco side are this season’s dark horses. The Ligue 1 outfit have arguably the best attacking unit out of the four remaining teams and they will look to make their mark here.

This year’s semi-final first legs will be played on 2nd and 3rd of May, with the return legs played the following week across 9th and 10th May.

Real Madrid will take on cross-town rivals Atletico Madrid in the first semi-final of this season’s Champions League. Los Blancos will play the first leg at home.

Italian champions Juventus will take on this year’s dark horses Monaco in the other semi-final of the Champions League. The French side will play the first leg at home.