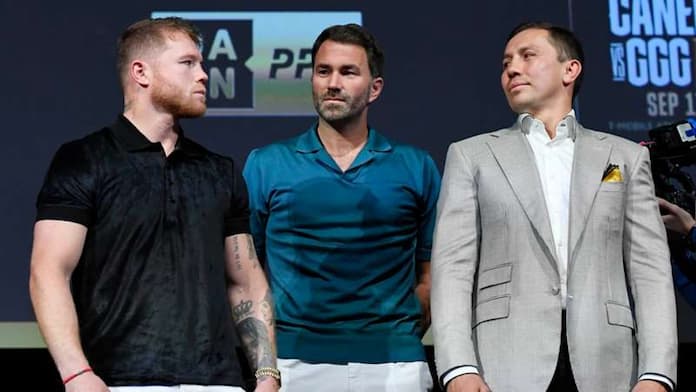 GENNADY GOLOVKIN and Saul ‘Canelo’ Alvarez faced off for the first time during fight week ahead of their trilogy bout this Saturday night. Canelo looked fired up, with Golovkin staying cool, calm and collected. The fight is just days away and cannot come quickly enough!

This is the third time the pair of boxing superstars will have faced each other, with the first fight being deemed a draw and the Mexican getting the nod in the second fight on the judges scorecards. Who will win the third and potentially final fight between these two great rivals?

Canelo and Golovkin Face Off

Now embarking on their third fight week as a pair, yesterday both Saul ‘Canelo’ Alvarez and Gennady ‘GGG’ Golovkin faced-off for the first time this week ahead of their trilogy bout on Saturday night.

Canelo vs GGG 3 goes down this weekend at the T-Mobile Arena, Las Vegas, Nevada. This was the venue for the second fight back in 2018 between these two boxing warriors, on a night that Canelo edged it on the judges’ scorecards.

With fight night being on Saturday, both Golovkin and Alvarez will face-off a few times before eventually going face-to-face in the ring just moments before they start throwing heavy leather at one another for the third time, beginning in the 25th round after two gruelling 12 round fights previously.

The 32 and 40-year-old will meet again on Thursday face-to-face as they partake in the press conference, before facing off for the final time before fight night at the weigh-ins on Friday afternoon.

Here is how the first face-off went yesterday:

FIRST FACE OFF OF FIGHT WEEK 🍿

The pair of boxing legends clearly have huge respect for each other in terms of boxing ability and as fighters, but there most certainly seems to be a bit of needle between the them.

Golovkin will still feel extremely hard done by, considering the vast majority of the boxing world had him winning the first fight, and the second fight was one you could give either way.

Canelo seems to also have a dislike towards the Kazakh, and will be hopeful of ending this chapter once and for all and closing the book on one of the greatest boxing trilogies in recent memory.

We’re now just days away from the trilogy between Saul ‘Canelo’ Alvarez and Gennady ‘GGG’ Golovkin. The excitement is real as the pair of boxing legends are set to do battle for the third and potentially final time!