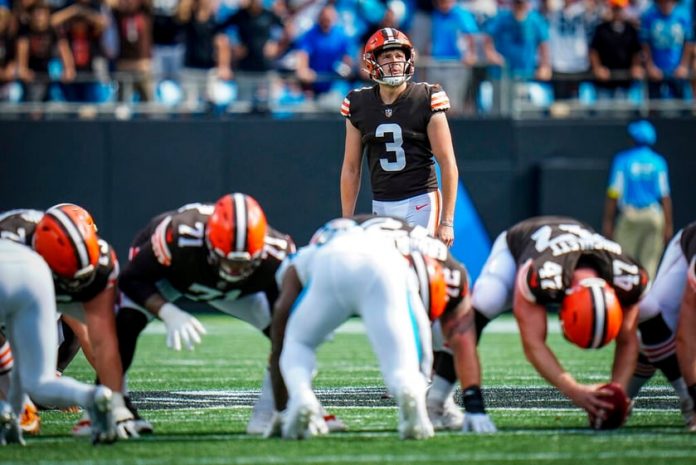 There was plenty of heroes during the opening weekend of the NFL and arguably none had a better weekend than rookie kicker Cade York, who’s 58-yard field goal won the Cleveland Browns opening game against the Panthers late on Sunday night.

York was the calmest man in the stadium on Sunday night, as he cooly swept his 58-yard kick between the posts with just eight seconds left on the clock to win the game 26-24 for the Browns.

There will have been plenty of enthusiastic football fans in Ohio celebrating on Sunday night, however the most wholesome reaction of the weekend came from York’s former high school coaches.

In York’s hometown, the 21-year old’s former coaches at Prosper High School watched on as the rookie made his impressive debut in the NFL.

The video shows Cade’s former coaches all watching on with pride and cheering as the rookie smashed his lengthy field goal with confidence to win his first game in the NFL and the Browns first game of the season.

It wasn’t just his game winning kick that impressed on Sunday however, as Cade went a perfect six out of six kicks on his NFL debut.

The kicker showed just how much confidence he has right now after the game, as he described his focus at the crucial moment:

“It’s not that it’s always you’re never nervous or you don’t have doubt but it’s just, in that moment, being able to turn off that anxiety and nervousness and just — drive and confidence and being able to push all the outside noise out and be able to step up in those types of situations,” York said.

The win was not only the first of the season for the Browns, it was also the first time that the Ohio side has won a season opener in the NFL for 18 years.