What’s the best league in Europe? It’s really a no-brainer.

It attracts the highest average attendance figures, offers a unique dose of atmosphere and crowd noise, and plays host to some of the world’s best players – while TV companies fight over themselves to broadcast it.

And, no, I’m not talking about the Premier League.

The actual leading light of the continent is the Bundesliga, which has so many success stories that it almost puts dominant force Bayern Munich to shame.

It is the top tier in the home of the world champions that is fast becoming the most sought after division in world football, with so much to boast of.

Last season, it outshone the Premier League – the self-professed greatest league of all – in two areas that have long been considered givens for the English competition: attendance and atmosphere.

What once was thought of as the Premier League’s USP has made way for corporate ticket prices, and library-like stadia.

Germany have usurped them in both: last season, the Bundesliga averaged an attendance of 43,539 noisy fans, such as Dortmund’s now iconic Yellow Wall. The Premier League could muster just 36,176.

That is fuelled by the huge disparity in ticket prices, with German football exceptional value for money. Arsenal’s cheapest season ticket costs £1,014, which is almost ten times more than the equivalent at Bayern Munich (£109.65).

You can make your own jokes about cost per trophy to fans.

Similarly, the Bundesliga puts La Liga and Serie A to shame in ticket prices, too – as clubs consciously consider the impact of their pricing to their fans. In England, these people are merely customers.

The interest has been piqued by on-field success, both domestically and internationally.

It was significant that the all-German Champions League final of 2013 – Dortmund losing to Bayern – was hosted by Wembley; that day proved a symbolic passing of the torch. 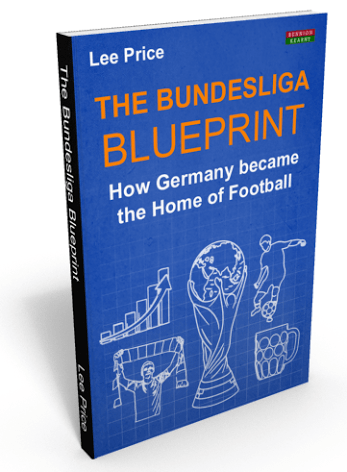 Little over a year later, and Germany were world champions, thanks to a team of talents who were blooded in the Bundesliga, and given a chance, as the league’s emphasis on homegrown players rather than expensive foreign recruits paid off.

In England, the Premier League and the FA are busy waging war on each other – the DFB and the Bundesliga worked together after the disappointment of Euros 2000 and 2004 to reimagine their domestic game.

Debt levels are lower, clubs are fan owned, and teams employ members of staff to work specifically on supporter issues.

Of course, it’s not all rosy in the German garden at the minute – there are concerns over the recent influx of cash into the Premier League, and how the Bundesliga will keep pace with that, or even prevent their stars from leaving for England.

A sense of limited opportunities in the Premier League, though, will prompt many to stay put.

Less of a new development is the dilemma of the all-conquering Bayern Munich, though Dortmund’s fast start to the current campaign will give hope of a title race for the first time since BVB lifted the trophy in 2012.

The Premier League is the best money-maker, La Liga has the world’s two best players, and Serie A offers vast tradition – but the Bundesliga is comfortably the best league in Europe.

Truly, the home of fussball.

Lee Price is an award-nominated national print journalist and published sportswriter who is, and has always been, besotted with football. He is the author of The Bundesliga Blueprint: How Germany became the Home of Football. Published by Bennion Kearny and available now.