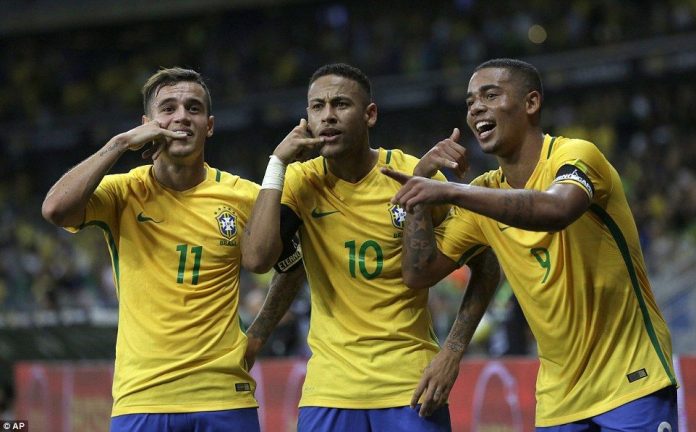 The World Cup and the Brazilian national side have a longstanding and spectacular relationship, but after the pair’s last encounter, the South American country have work to do.

Hosting the tournament in 2014, they dreamed of lifting world football’s biggest accolade on home soil but were destroyed in the semi-finals, 7-1, at the hands of Germany.

The side that went into that competition was unconvincing – the same cannot be said this time round.

Brazil are rightly one of the favourites to win the World Cup in 2018, with star players in almost every position.

Brazil boast players from most of the world’s biggest clubs, with the vast majority of the squad plying their trade in the European game.

While good players have been left out, almost every position has competition for places and the South American outfit look like an ominous prospect on paper.

Dani Alves will miss the tournament after being seriously injured for Paris Saint-Germain, leaving the right-back position in the Brazilian team with a question mark surrounding it.

A host of experienced and gifted players have also been deemed as surplus to requirements.

Brazil have endured a couple of tough years, with Luiz Felipe Scolari and Dunga getting second bites at the managerial cherry and failing to inspire the players.

However, the lesser-known Tite has steadied the ship since taking the reins in 2016 and oversaw a dominant qualifying campaign.

Remarkably, the Brazil job is the 57-year-old’s 17th managerial tenure but the journeyman has solidified the team’s defence and unleashed the Selecao’s devastating attacking talent.

As per many of the legendary Brazil teams of the past, the current crop adopt a back four and have an attacking outlook, personified by forward-thinking full-backs.

However, the major change since Tire’s arrival has been a sturdiness that has been forged with the fielding of Casemiro and Fernandinho as midfield enforcers.

This foundation will allow players higher up the pitch to express themselves, with the likes of Neymar, Philippe Coutinho, Willian and Gabriel Jesus creating panic in opposition rearguards.

While this Brazil is more-defensively sound than some of the sides that have preceded it, still expect plenty of flair and skill in the final third.

Although experienced heads like Thiago Silva, Marcelo and the midfield duo will be crucial to Brazil’s chances, it is hard to look past Neymar as their key player.

The PSG superstar is revered in his homeland and follows in the footsteps of some iconic Selecao attackers.

Neymar has the ability to single-handedly win a game – but his sizeable ego and reputation also have the ability to negatively impact team-mates and dictate a specific way of playing.

With the mercurial attacker injured in the lead-up to the tournament, it remains to be seen if he is fully fit – and what Brazil will do if he is not.

Paulinho is figure of mockery among Tottenham Hotspur fans after his ill-fated spell in North London, while the midfielder was also part of the 2014 side that capitulated so spectacularly.

However, to his credit, since then the all-action midfielder has reinvented himself and earned a move to Barcelona.

While Paulinho may have to make do with a place on the Brazil bench, the high-energy star has the knack of being the right place at the right time and could well make an impact on games as a substitute if needed.

Given their calibre, Brazil should easily win Group E and the South Americans will travel to Russia with one objective – to win the World Cup.

It will take a strong side to deny them their dream and if Tite’s men hit their straps, there is every chance the Selecao will be triumphant for an unprecedented sixth time.

Brazil look highly likely to make the semi-finals at least, however, Spain, France and Germany all have the ability to beat the South Americans in a one-off game.