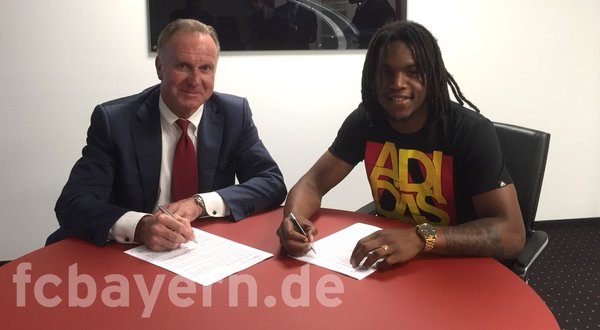 German champions Bayern Munich have stunned everyone after they announced the signing of Benfica’s highly talented youngster Renato Sanches on Tuesday.

The 18-year-old midfielder joins Bayern on a five year deal, with the transfer fee being quoted is around €35m, plus bonuses.

The news will come as a huge blow to Manchester United who were equally interested in signing the talented Portuguese. In fact, United were thought to be leading the race for his signature, and it seemed only a matter of time before the Red Devils would announce his signing officially. Thus, Bayern moving ahead of them and signing a deal within such a short time has come almost out of the blue.

It is really hard to fathom how Bayern managed to sign him ahead of United. If the widespread reports are to be believed, United scouts had watched him on a numerous occasion this season and were impressed with the youngster’s rapid progress.

Benfica say a further €45m in bonuses, making a total deal worth €80m.

Benfica are thought to be demanding a further €45m in bonuses, which would take the deal worth €80m.

Never fear, #MUFC fans. There is nobody better at clinching a late-August panic buy than your executive vice-chairman

Reliable football journalist Gianluca di Marzio claimed last month that Sanches was close to joining Manchester United. He claimed that a fee had been agreed with Benfica over a possible move, while the youngster had agreed personal terms with the Red Devils.

Sanches would be a terrific signing for Bayern. He is a typical box-to-box midfielder and plays with a lot of self belief and confidence. He is always willing to drive his team forward from central positions, and has often been compared with Juventus midfielder Paul Pogba for similar style of play.