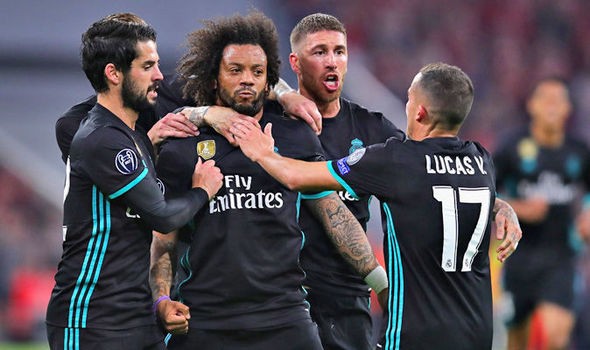 Real Madrid’s recent hex over Bayern Munich continued on Wednesday night, as the Spaniards took the ascendancy in their Champions League semi-final tie with a 2-1 first-leg victory at the Allianz Arena.

Things were looking rosy for the Bundesliga giants after Joshua Kimmich’s opener, but goals from Marcelo and Marcos Asensio turned the tie on its head.

The result means Madrid have beaten Bayern in the last six competitive meetings between the sides and puts Zinedine Zidane’s men in the driving seat to make the competition final in Kiev.

Here are three observations from the game in Bavaria.

Not many clubs have the resources to boast a bench containing Gareth Bale and Karim Benzema, but Zidane’s decision to turn to lower-profile alternatives worked well.

Lucas Vasquez is a player that has earned the Madrid coach’s trust and the hard-working wideman again impressed on the right wing and then at full-back.

Asensio came off the bench to score the decisive goal and Zidane’s decision to turn to the youngster ahead of Bale again paid dividends.

Madrid have been famed for their Galacticos approach of fielding a team of superstars but the current boss has shown that the inclusion of some understated players can improve the team.

For unused substitute Bale, the end of his time in the Spanish capital is surely approaching and a return to the Premier League this summer seems likely.

Madrid signed James Rodriguez from Monaco after the Colombian’s World Cup heroics in 2014, but things never really panned out for the skilful midfielder at the La Liga outfit.

A loan move to Bayern has restored the South American’s swagger and the return of Jupp Heynckes has helped the playmaker get back to his best.

Rodriguez was clearly out to prove a point against his parent club and was a rare bright spark in an otherwise flat performance from the German powerhouses.

A major reason for Bayern not being at their best was Arjen Robben getting injured and substituted in the early stages, with the introduction of Thiago Alcantara in his place throwing off the balance of the home side.

Thomas Muller struggled to make an impression on the right flank and as a result anything positive that the Germans provided was down the other wing and through Franck Ribery.

Bayern have the tough task of turning the tie around at the Santiago Bernabeu and Heynckes will need to get the right blend in his side to stage a comeback.

Liverpool have nothing to fear

Three goals to the good after an impressive 5-2 win over Roma, Liverpool have one foot in the Champions League final – and should be confident of winning Europe’s top tournament.

Neither Madrid nor Bayern showed anything on Wednesday night that should worry Jurgen Klopp or his high-intensity Reds side.

While these European powerhouses are full of experience and household names, there is a feeling that both sides are on the wane and were a more-ominous prospect a couple of years ago.

Both Bayern and Madrid look susceptible on the flanks, in an area that Mohamed Salah, Sadio Mane and Liverpool could expose.

Klopp has made real progress since taking over at Anfield, with the German coach looking in an ideal position to make a massive statement by leading the English side to European glory this season.