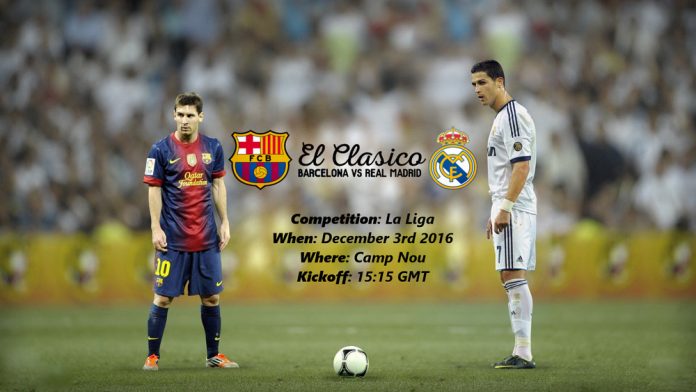 Barcelona v Real Madrid, often known as El Clasico, is not only one of the biggest footballing events, but one of the biggest sporting events in the world. Just behind the UEFA Champions League Final in terms of occasion, every edition of El Clasico is watched by record numbers, with Spanish football’s two heavyweights set to lock horns once again this Saturday at the Camp Nou — and Sportslens has created the perfect guide in the form of a packed infographic.

The 232nd El Clasico, and the 173rd in La Liga, will feature the likes of Cristiano Ronaldo and Lionel Messi, with Barcelona now chasing Real Madrid at the top of the league. Los Blancos hold a commanding six point lead at the summit.

Such is the duopoly held by the two richest clubs in the world. A loss for Barca on Saturday, and the resulting nine point gap between them and their bitter rivals could spell the beginning of the end for Luis Enrique‘s side’s title challenge.

A win at the Nou Camp is a must, and the Catalan side will be buoyed by the return of captain Andrés Iniesta from a spell on the sidelines. The Spaniard has been out with a knee injury, and his return will see an almost full-strength Barca side take on Real in the latest edition of La Liga’s showpiece event.

Real, on the other hand, lost Gareth Bale to an ankle injury last week, and will have to make do without both Alvaro Morata and Toni Kroos for their trip to Barca.

The match will be the second El Clasico of the year, and the first of the 2016/17 season, with Real Madrid last coming out on top at the Santiago Bernabeu in April with a 2-1 win.

Fubo.TV is a real-time and on-demand streaming service that brings live games, club channels, news documentaries and more to your TV, PC, games consoles and mobile devices.
This service allows you to watch live matches and re-run previous matches as well as match highlights for select football teams.

You can watch all of Barcelona and Real Madrid’s matches here. Sign up for free at Fubo.TV to start your free 14-day pass and catch the first El Clasico of the season this weekend. It is $6.99 thereafter for unlimited viewing.