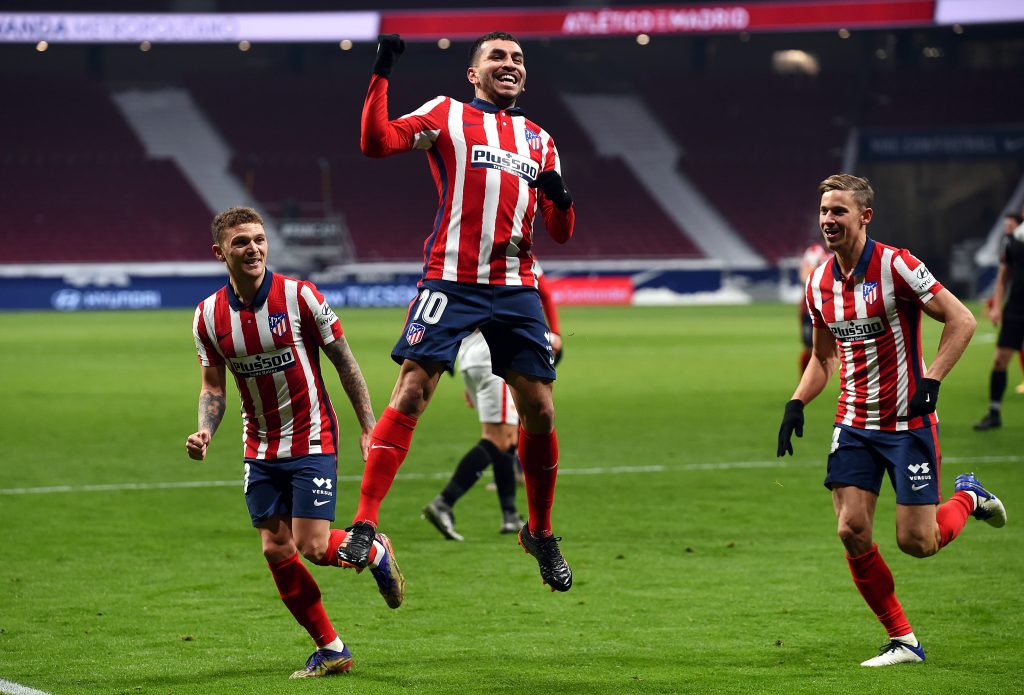 We’re just over halfway through 2020/21, but it is already proving to be quite the season all over Europe.

In England, we have an intensely fluctuating title race with eight different table-toppers already. In Italy, Juventus are not leading for a change, as AC Milan are at the top of Serie A, with Inter Milan, Roma, Napoli, the defending champions and Lazio not too far behind.

In France, we actually have a title race as Lille and Lyon are in front of third-placed Paris Saint-Germain, who finally might actually have to fight for a domestic trophy. In the Bundes- *sees Bayern Munich seven points clear at the top* oh well, never mind that actually.

But down in Spain, there is an even greater gap between first and second place. Atlético – the other club from Madrid – have a 10-point cushion with games in hand. In a season where almost every major European club is faltering (even Bayern got knocked out by second-tier side Holstein Kiel in the DFB Pokal), Atlético have risen above the chaos with just one league defeat and 50 points from 19 games, which means that they are on course for a century.

This La Liga points per game chart does a good job of showing the massive gap at the top. The difference between Atlético’s 2.63 and Barcelona’s two is the biggest between any two consecutive positions in the league – they are running away with this.

So, let us take a look at why Los Rojiblancos are flying so high right now:

The duopoly of FC Barcelona and Real Madrid – the two famous contestants of El clásico – has been a theme of Spanish football since its inception. Combined, the two historic rivals have won 140 domestic trophies. Since the 2004/05, the league has been won by either of those two clubs on all but one occasion – 2013/14 – when Atlético won their 10th La Liga title and first since 1995/96.

But, in keeping with the spirit of the 2020/21 seasons, things have been slightly different this year.

The struggles of Barcelona have been very well-documented. They had many underlying problems which were all exposed by that nightmarish 8-2 defeat in the Champions League against Bayern, which has led to disaster after disaster at the club. Political issues, new managers, horrendous transfer business, and, above all, Lionel Messi – no less than a Barcelona God – wanting to leave. If God deserts you, you’re pretty much done for.

After a horrific start to the season where Barça were languishing in the bottom half of the table, they have at least managed to claw their way back upwards, reaching second place now. In the meantime, Real Madrid have decided to take the spotlight of disappointment.

Having won the La Liga thanks to a late charge last season, Madrid were favourites to reclaim the crown this time around, especially with Barcelona is such a sad state. They started off pretty well too, losing just one of their first six games. But, they started stuttering thereafter, with disappointing defeats against Valencia and Alavés surrounding a draw with Villarreal in November.

Things have been up and down for Los Blancos ever since – they beat Sevilla and handed Atlético their only defeat of the season so far, but drew to the likes of Elche and Osasuna, and most recently, lost to Levante.

With the big two falling off, the league was left wide open for any new challengers. Initially, Real Sociedad looked to be just that as they lost just one of their first 13 league matches, but they have dropped off since with just five losses and three draws in their last eight matches.

At the same time, though, Atlético’s sensational form should not be underestimated.

December 23, 2021, will mark the Tin anniversary of Diego Simeone’s time as manager of Atlético Madrid. In that time, El Cholo has solidified himself as a legend at the club. He has taken Los Rojiblancos to two Europa League victories, as many Champions League finals and that famous La Liga victory in 2014.

However, in the last three years, the Argentine manager has failed to bring any trophies to the Wanda Metropolitano. Naturally, that has brought him under a fair amount of fire, but the artillery has retreated lately thanks to Atléti’s stupendous form.

Throughout all of that, Atlético have been renowned for their Antonov An-225 Mirya of a defence, which, coupled with Jan Oblak’s Lockheed SR-71 Blackbird-speed reflexes, has made them almost unbreachable.

However, they have faced issues at the other end – ranking seventh in terms of goals scored in last season’s La Liga. While their defence ensured that Los Rojiblancos did not lose too often, their misfiring attack meant that no other team in La Liga drew more matches than them last season (16).

This year, Atlético have not only maintained the tightest defence of the league (conceding six fewer goals than any other side), but they have also upgraded to the second-best attack in the league, scoring just one less goal than Barcelona. For that, many players have stepped up.

Marcos Llorente has finally added goals to his game, doubling his league tally from last season already and nearly doing the same with his assists. João Félix has also improved on his goal involvements from last season by three halfway through the new campaign, with Yannick Carrasco doing something quite similar. Ángel Correa has been the best provider this season, and he too has matched his assists tally from 2019/20.

But, there is one key to all of this that we have not mentioned yet.

Atlético have certainly been the greatest beneficiaries of the Barcelona turmoil. Besides leading the league, they also snapped up one of the Blaugrana‘s best players in Luis Suárez. Ronald Koeman didn’t want him at the club when he joined as a manager prior to the start of this season, but the Uruguayan striker has been showing him just how wrong he was in a variety of ways.

With 14 goals already, Suárez is La Liga’s outright top-scorer. With 15 starts and a substitute appearance, he has averaged just under one goal per 90 in the league, outperforming his xG by 5.3. In short, he has proven to be exactly what Atléti needed up front.

Ever since Antoine Griezmann left for Barcelona, Los Rojiblancos have been craving a proper goalscorer. Returnees Álvaro Morata and Diego Costa were certainly not bad in their own rights, but they did not hit the back of the net as often as they should have. In fact, Suárez has already outdone both strikers’ respective league goal tallies in their most recent stints in just half a season.

Atlético have always been on the verge of greatness recently, but they were never more than this close. However, in Suárez, they have seemingly found the final piece to their puzzle.

Atlético Madrid’s first half of 2020/21 has been about as good as it ever has been for them, but it was not devoid of some scares. They made advancing to the knockout stages of the Champions League a bit tougher than it needed to be and were tossed out of the Cope del Rey by third-division side Cornellà.

In the league, though, Atlético have been near-untouchable, and as aforementioned, are on course to become only the third centurions in La Liga history after, of course, Real Madrid and Barcelona. However, it is important that they do not get too far ahead of themselves, because, after all, they are not called El Pupas for nothing.