Sportslens.com
Home Teams Barcelona Barcelona in 2020: a Messi-shaped hole that may never be filled 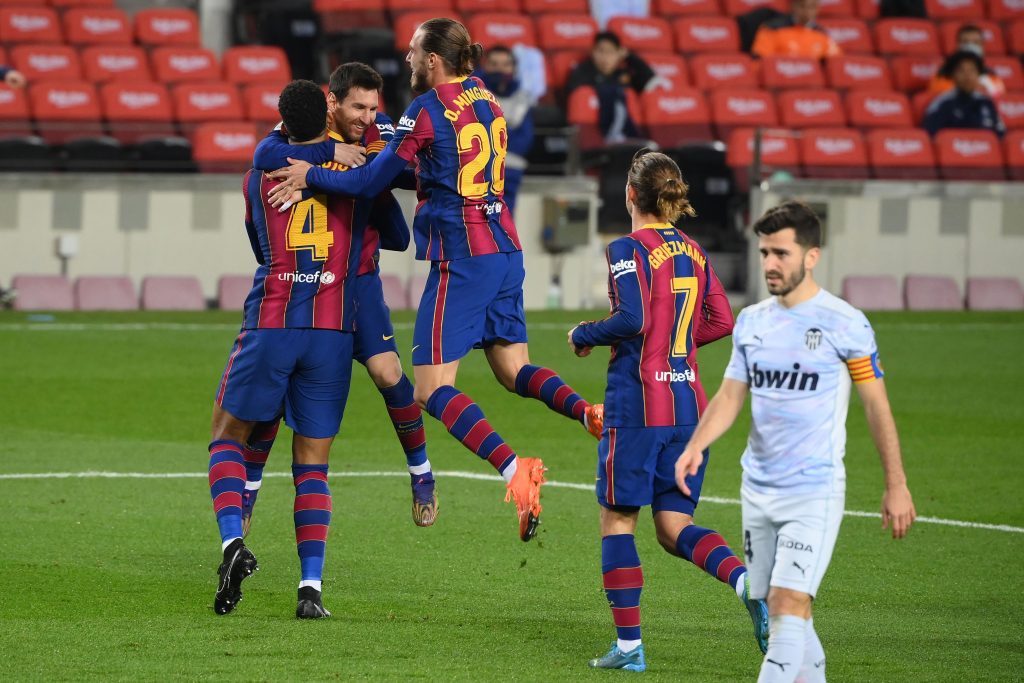 It’s been a turbulent year for Barcelona. Failure to win a third La Liga title in a row, humiliation in the Champions League, the Lionel Messi transfer saga, three different managers – and they end it all in sixth place.

Having started the year on course to defend their crown, La Blaugrana ended the season without a trophy. The future is not looking bright at the Camp Nou.

By his enormous standards, it’s been a somewhat underwhelming year for Lionel Messi. However, he still remains the talisman in this Barcelona side.

He ended the 2019/20 season with his lowest tally since 2008, scoring just 31 goals (pathetic, I know), and began the new campaign with just five open play goals. Despite this, he still managed to win the La Liga Golden Boot, as well as recording 21 assists – a La Liga record. In doing so, he became only the second player to hit the 20-mark for goals and assists in any of Europe’s top five leagues, after Thierry Henry in 2002/03.

Furthermore, his strike against Real Vallodolid set a record that will likely not be beaten for generations. It was his 644th goal for Barcelona, surpassing Pele’s one-club record with Santos.

After an unsuccessful campaign, Barcelona fans were hoping to bounce back under new manager Ronald Koeman. The Dutchman could hardly have made a better start in his debut match against Villarreal.

Teenager Ansu Fati got the ball rolling with an early brace, and Lionel Messi soon made it three from the penalty spot. Pau Torres’ own goal put the Catalan giants 4-0 up just before half time, and that’s how it stayed.

Fati was in top form, De Jong was playing well, Coutinho was finally starting to look like the £142m man they thought they’d bought, Messi was as stellar as ever – it all seemed so promising.

There are no words in the Oxford English Dictionary that can describe what we saw on August 14th 2020 in Lisbon.

Off the back of a convincing victory over Napoli, Quique Setien’s side went into their Champions League quarter-final in high spirits. Little did they know what was about to come.

Thomas Muller netted an early goal for Bayern Munich, but a comical own goal by David Alaba put the scores level. From then on, it was an absolute onslaught.

The Bavarians hit three in nine minutes to make it 4-1 going into the break, with Ivan Perisic, Serge Gnabry, and Thomas Muller again adding to the scoresheet. A goal by Luis Suarez offered some hope of a comeback, but this was quashed swiftly by Joshua Kimmich’s tap in six minutes later.

Philippe Coutinho – on loan at the German side from Barcelona – completed the humiliation, firstly setting up Robert Lewandowski for an easy header, before scoring a brace in the final five minutes. Bayern Munich 8-2 Barcelona. EIGHT TWO.

Rather unsurprisingly, this was Quique Setien’s final game in charge of Barcelona.

Firstly, there was the Martin Braithwaite situation, where the club was controversially allowed to sign the Dane from Leganes after an injury crisis. He’s been fairly solid back up, but the former Middlesbrough man is hardly up to the standards of Barcelona’s previous forwards.

But it was in the summer when the drama really started. They swapped Brazilian midfielder Arthur for the much older Miralem Pjanic, who is yet to make an impression at the Camp Nou. American right-back Sergino Dest is looking like a good addition, while winger Francisco Trincao is still finding his feet.

A number of the club’s biggest names departed. Not many fans will miss the unimpressive Nelson Semedo, and the €30m received for him seems like good business. Furthermore, the likes of Luis Suarez, Arturo Vidal, and Ivan Rakitic were all past their best, and probably needed to go.

However, those three fetched just over €1m between themselves. Surely players of their talent had a bit more value? And, in Suarez’s case, no replacement was bought, leaving Braithwaite as the club’s only natural striker.

Most of the summer drama came from transfers that didn’t happen. As ever, Neymar was closely linked with a return to the Camp Nou, but this never materialised. Meanwhile, Lionel Messi dropped a bombshell on the world of football by handing in a transfer request. After a long-running feud with former president Josep Maria Bartomeu, the Argentine stayed put for another year.

Ernesto Valverde was sacked on the 13th of January, leaving La Blaugrana in first place, but still looking unconvincing.

Quique Setien was unable to finish the job, falling behind Real Madrid after a series of post-lockdown draws. This was compounded by quarter-final exits in the Champions League and Copa del Rey.

Ronald Koeman returned to the club where he spent six years as a player, having impressed as the head coach of the Netherlands. And somehow, he has managed to do even worse than his predecessor, leaving Barcelona in sixth place – ten points behind table toppers Atletico Madrid having played one game more.

If the Dutchman doesn’t turn things around quickly, his head will soon be on the chopping block.

What an absolute nightmare of a year it’s been for Barcelona.

To put it bluntly, they’ve failed in every single competition they’ve participated in. They finished five points off the title, failed to surpass the quarter-final stage of either knockout tournament, got thrashed in the Champions League, and are miles off top spot this season.

And, given the current financial situation at the Camp Nou, there doesn’t appear to be much light at the end of the tunnel. No one knows what 2021 holds for Barcelona, but it isn’t looking promising.