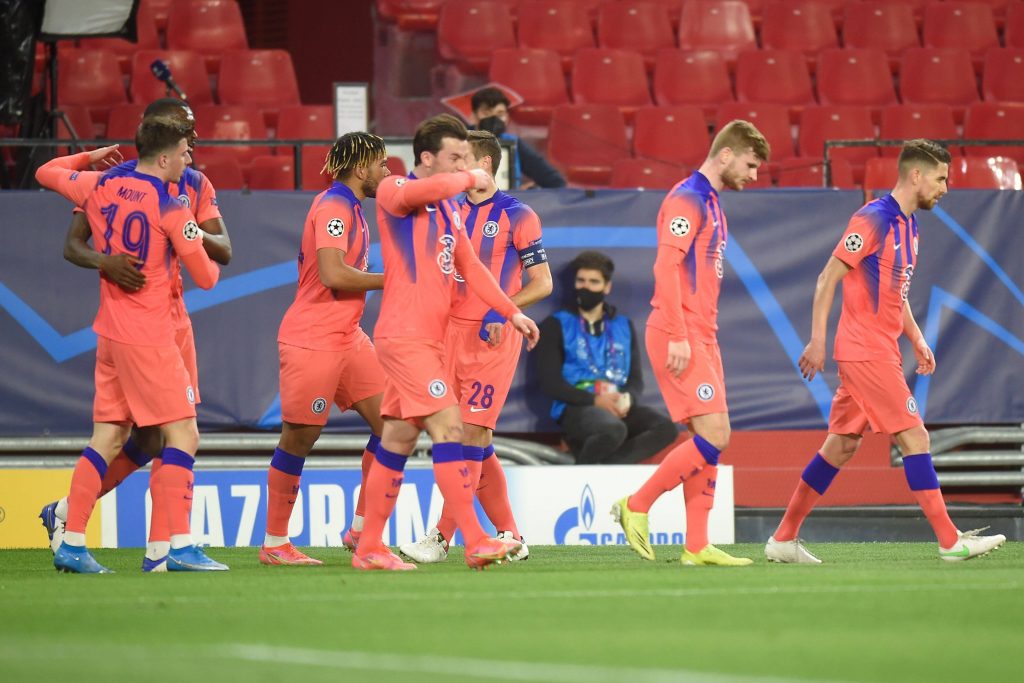 Chelsea beat Porto 2-0 in the first leg of their Champions League Quarter-final tie to give the Blues an advantage heading into next week’s return fixture.

First goals in the competition from both Mason Mount and Ben Chilwell were enough to triumph over their Portuguese opponents on the evening at the Ramón Sánchez Pizjuán Stadium in Seville.

Both legs of the tie are to be played at the home of La Liga side Sevilla due to ongoing restrictions related to the coronavirus pandemic, with this first leg being deemed as an away fixture for Chelsea.

Coming into the first leg, ‘hosts’ Porto made four changes from their 2-1 victory over Santa Clara in the Primeira Liga at the weekend.

Former Newcastle United defender Chancel Mbemba was one of these, with manager Sérgio Conceição naming the following starting 11:

Meanwhile, ‘visitors’ Chelsea made five changes to their side from a humiliating 5-2 defeat against West Bromwich Albion.

Amongst the changes, manager Thomas Tuchel opted to re-jig his defence, with Thiago Silva and Kurt Zouma being replaced by Antonio Rüdiger and Andreas Christensen.

Porto started the game on the front foot, and they were the side that looked most likely to break the deadlock in the opening quarter of an hour.

Luis Díaz saw a shot blocked in the box before Mateus Uribe’s strike from the edge of the area went inches over the crossbar and landed on the roof of the net.

Uribe did well to control the ball and hit it on the volley but wasn’t rewarded with a goal for his efforts.

Approaching the 25-minute mark, Chelsea were yet to trouble the Porto goal, and the Portuguese side were to come agonisingly close once again, this time from a set-piece.

Swung in by Otávio from the left-hand side, the ball looked to be sailing straight into the net at the near post, but goalkeeper Edouard Mendy palmed it away.

Porto centre-back Pepe kept it alive and nodded back across goal, but Zaidu Sanusi could not convert and fired a shot high over the goal.

Playing in their red and blue away kit, Chelsea were in a battle, and they knew it as the Blues started to create some pressure of their own.

Porto were playing quite a high line defensively with a level of success. However, it led to their downfall when midfielder Jorginho drilled an inch-perfect ball into Mount’s feet in the 32nd minute following some patient build-up play.

Mount – one of the five players recalled to the starting 11 – creatively spun away from his marker and into the box with one touch, burying the ball deep into the far bottom corner of the net with a powerful strike for his second.

Arguably, ‘keeper Agustín Marchesín should have saved it, but Mount’s shot – Chelsea’s first of any kind on the night – had Chelsea in front and gave the 22-year-old his first-ever Champions League goal.

Porto reacted well to going behind, and it took a block by César Azpilicueta to prevent Jesús Corona’s volley from creeping into the bottom corner of the net. From the resulting corner, Pepe had a header palmed away by Mendy.

Liverpool loanee Marko Grujić also forced a save from Mendy, but at half-time Chelsea led 1-0 through their only shot of the game.

Tuchel’s men had the first opportunity of the second half too. Goalscorer Mount crossed a ball into the box for Timo Werner to attack, but the German could not get enough power on his header, which went sailing over the bar without any danger.

Conceição’s side weren’t going to take the defeat lying down, and they came again in search of an equaliser.

Moussa Marega forced a good save from Mendy, having been played in behind Rüdiger before Chilwell had to block a shot on the line following a goalmouth scramble from a corner.

The offside flag went up before Chilwell made the clearance, but the defender wasn’t to know this. Díaz then struck wide of goal having escaped his man, but for all their efforts on goal, Porto were unable to make one count.

There was almost an embarrassment for Marchesín when he spilled a long-range strike by Rüdiger into Werner’s path, only for the attacker to be offside.

Werner had attempted to square the ball for Kai Havertz to tap home, which his teammate was unable to do anyway.

Chelsea’s captain – Azpilicueta – almost became the pantomime villain in the minutes to follow. He first missed a header from close-range and could have given away a penalty with 20 minutes remaining.

Marega went down in the box under the defender’s challenge, but referee Slavko Vincic waved away appeals.

In the midst of Azpilicueta’s starring role, Tuchel had made a double substitution to replace Werner and Havertz with Christian Pulisic and Olivier Giroud.

Giroud had previously scored all four goals for Chelsea at the Ramón Sánchez Pizjuán Stadium in their 4-0 win over Sevilla in the group stage of the competition, but it was Pulisic who was presented with a chance to score shortly after entering the pitch.

The American international rattled the underside of the crossbar, and with little more than five minutes to go it had the feeling of a missed chance which could be costly for his side.

However, Ben Chilwell ensured that this wasn’t to be the case almost instantly as he doubled their advantage and put Tuchel’s men in the driving seat heading into next week’s second leg.

A long ball up the pitch from Mateo Kovačić was miscontrolled by Porto’s Corona, and Chilwell took full advantage as he picked his opponent’s pocket to be left one-on-one with keeper Marchesín.

Chilwell rounded him and tapped the ball into an empty net to make it 2-0. In doing so – like Mount – he grabbed his own inaugural goal in the competition.

Chelsea had scored twice despite having just three shots on target, the only one which didn’t result in a goal being Rüdiger’s earlier attempt.

Chelsea saw out the game well and ran down the clock with a substitution in the closing stages. On came Emerson to replace Kovačić with the referee bringing a halt to proceedings very shortly afterwards.

So, a 2-0 winning margin for Tuchel’s side and an 8th clean sheet in nine games.

The two sides will do it all over again in Seville next Tuesday for Chelsea’s ‘home’ leg. With this first leg performance the Blues are in firm control of the tie and may allow themselves to look forward to a semi-final against either Liverpool or Real Madrid.